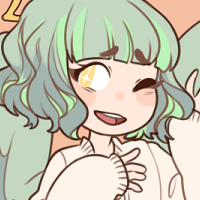 She's been called Aggie before and doesn't really mind it!

Papercuts, horror movies, angry people, conflict, parties, having to interact with strangers, anxiety, strong perfumes and colognes, mold, splinters, seeing books being treated disrespectfully, people who make fun of or discourage kids, memories of her death, being guilted into something, passive-aggression, violence, spiders, dust, wearing skirts, having her arms uncovered.

10:03 AM exactly. I mean, she likes the morning and noon hours in general, but something about that specific time...

She was named after Agatha Christie! Her parents were big nerds, too.

Agatha is a member of a closed species known as Cherubabs, created by @smoochu! You can read more about them here!

Agatha is kind, gentle, patient, and a bit on the quiet side. She has a strong warmth about her, but anyone can tell that there's a subtle coldness just a few layers beneath it all. She can be somewhat guarded and, though she's very friendly, she's definitely more of an introvert than an extrovert. She feels more comfortable in small groups or on her own, reading or partaking in creative pursuits. Large groups - especially of unfamiliar people - make her nervous, and though she's pretty good at hiding her anxiety she'd just rather not be in those sorts of situations

She's a curious person who loves reading, but sometimes this backfires on her as she's very easily affected and sensitive: she's easily frightened and is such an empathetic person that she'll cry at pretty much every book or piece of news she reads, whether it's happy or upsetting. Expressing anger doesn't come easily to her due to her peaceful and caring nature, but she can - against her will - hold grudges forever. She hates lying, but when she has to it eats away at her. Tends to build up negative emotions inside of her mostly because she doesn't want to bother them with her feelings, but also because in some cases she... well, she just can't. It wouldn't be safe. She has people she needs to protect, and doesn't want to do anything to put them at risk.

Very self-sacrificing and holds the feelings of others above her own despite hating the fact that she does that. She's just not very good at saying no and is too empathetic to reject people.

From birth Agatha loved learning and reading and spent most of her life with her face in a book. She excelled in school, though she never had very many friends. That was fine, though! Books and writing were honestly all she needed to be happy!

Her life proceeded normally up until around late in high school, when she decided it was time to get a job so she could eventually move out and grow her book collection. She was thrilled that she was able to get a job at a local library! Though it was sort of... a strange library. It was an old, creaky, small, dark, and dusty thing in the part of town that was always dead silent, even in the middle of the day. It was full of cobwebs, every book was torn and aged, and the owner was extraordinarily fidgety and seldom present. The selection was far from diverse, with almost every book involving religion, the occult, the paranormal, death, or - rather disconcertingly - anatomy. As a fairly religious person Agatha felt a bit unsettled by her new workplace, but figured beggars couldn't be choosers and was nonetheless pleased to be getting paid to be around books all day.

The library was almost always empty, which was a mixed bag. It gave Agatha the time to slack off and read the library's contents, but it also made it even spookier than it usually was. The only visitors were quiet and shifty, avoiding eye contact as they rented things out and speaking as laconically as possible. Her unease increased over the years as more of the same occurred. Where were the curious kids who wanted spooky ghost stories? Where were the religious people who sought a deeper understanding of all sides of their faith? Where were the goth kids who wanted their bookshelves to be as edgy as possible? Where was anyone other than the few nameless faces she saw again and again? Why did the library's owner avoid her as much as possible and dodge her questions? Why weren't there any other employees? Why did she often hear a shuffling here and a creak there when she was supposed to be alone?

She was still working there into college, but it was starting to make her so anxious that she wondered if she should quit. Her ratio of money gained to work done was pretty remarkable, and no matter how unnerving the content she really did enjoy being able to read all day... She was hunting for another job on the side, but it wasn't a huge priority.

And then came the day of her death, a day full of more shuffling and creaks and shaking, paranoid strolls between the shelves made in search of what she hoped would be nothing. In the middle of such a walk, the library promptly and unceremoniously collapsed, killing her in the process.

For better or worse, it really was just her fear making her imagine things! Not to say that Agatha wasn't the side-character in the story of a far more interesting life, but the library had been a death trap to start with. Recent weather didn't help matters, and it was really just bound to fall down someday. There were no ghosts, demons, or monsters involved - not in the collapse, anyway - just a poorly-maintained building and an irresponsible owner who most certainly was going to face some serious charges for Agatha's preventable demise.

Before she knew it, Agatha was a Cherubab and was assigned to watch over and protect a young girl named Melibella Mirifica. Though Agatha was a little upset about being crushed to death under a pile of books and wooden beams, it took her a remarkably short time to adjust to being a Cherubab. She accepted her death and subsequent new life and, really, it wasn't so bad! Melibella was a creative and excitable girl who loved to draw, explore, and engage in all sorts of media to get ideas for her own stories and adventures. It was sort of like having the little sister she never had but always wanted! It was a lot of fun to help raise her, guide her, and help her imagination blossom into something beautiful!

Honestly, Agatha wound up being happier in death than she was in life! She felt really useful... being someone's guardian angel felt very right to her, very ideal. She was comfortable with it, and furthermore Melibella was enthusiastic about it! What could go wro-

Melibella receiving an otherworldly invitation to a place called Heaven College was unexpected, to say the least. Agatha was overwhelmed by the knowledge that there were other heavens and other gods out there, and that there was an institution that invited residents of them all to one place. And, furthermore, why melibella? She was alive and well, and not particularly religious... was it because of Agatha's presence? Regardless, Melibella accepted, as this was just the sort of magical adventure she always dreamed of going on!

...And that was where everything went awry, where the world twisted around them in ways neither of them ever knew possible and Melibella got so much more than she asked for.

Agatha's become more determined to protect her than ever, even as she becomes more and more aware of how powerless she is in comparison to---

She's in a library back in time, some point before her death. It seems she's having issues.

Agatha is a Cherubab, so first and foremost off she has large wings that she can fly with. Other than that she doesn't have much in the way of magical powers or special abilities: she can take a human form to blend in with normal human beings, she can only be harmed by other celestial beings and demons, and... well, that's it, really!

At Heaven College she's classified as a charity-class angel, which means that her powers are linked to love. Most "guardian angel" sorts of species and individual beings get classified as charity-class due to their innate association with caring for others. They gain power not only through love through others - be it romantic, platonic, sexual, or familial love - but also the love they inspire others to have for them. Cherubabs fit nicely into this category, considering that protecting someone for their whole life certainly requires and (ideally) inspires love!