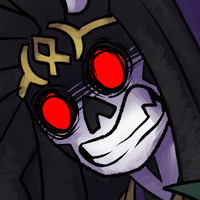 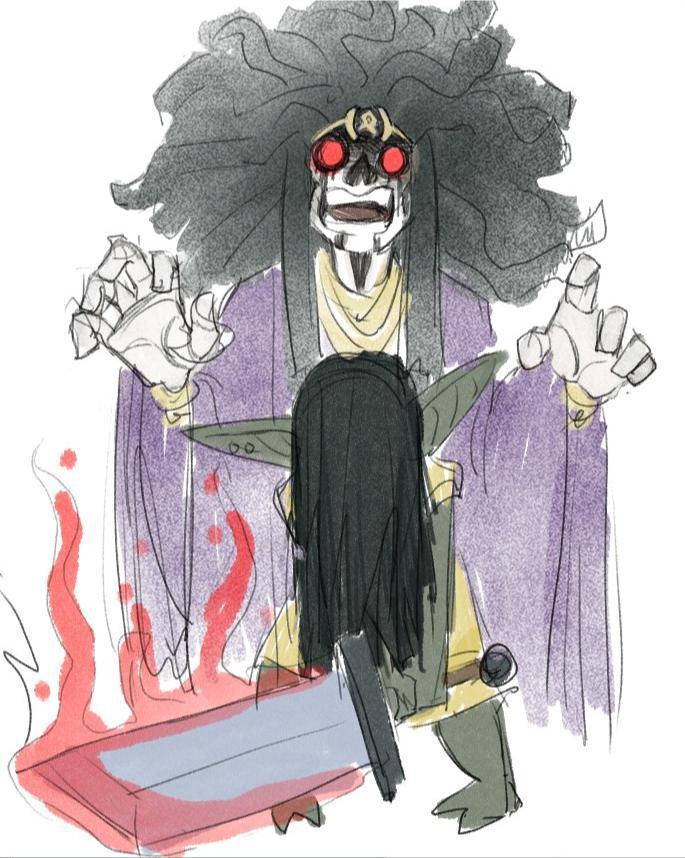 Ah yes, this guy. Noctomezo is actually one of my OC's OCs (a SHSL LARPer, naturally) but I wanted to use him again because I liked his design. Maybe I'll play some more of Sascha's OCs later...

Noctomezo is a very, very old dethroned lich with only a fraction of his former power, hence why he's forced to tolerate being bossed around by Daisy of all people. I still can't decide just how seriously to take him-- I like the contrast of actual horrible past deeds with the way Daisy treats him, but I also like him being basically a necromancer version of Kuzco.

Ordinarily, Noctomezo resides inside his phylactery: a luxurious purple cape that has been sewn into a teddy bear with red eyes and angry eyebrows. When possessing Daisy, he's free to assume his true form, which resembles a humanoid wearing body paint that looks like a stylized skeleton. His eyes glow red, he has a floating mane of black dreadlocks, and he wears his trademark cape and a prodigious amount of jewelry.

NOCTOMEZO THE FORBIDDEN ONE, LICH-KING OF THE OBSIDIAN THRONE was once a living ruler of an ancient human civilization, and a fearsome one at that-- his ruthlessness was legendary, second only to his sheer hedonism. His love of enormous banquets, precious jewelry, and handsome men and women could have tanked the economy of a smaller country (though to be fair, he was an incredibly loyal patron of the arts.)

Things started going south when one day he noticed some grey hair in his dreadlocks. In the throes of an existential crisis, he demanded a team of his most powerful magicians research methods of immortality that would allow him to revel as he pleased. He ended up choosing the ritual to become a lich, as it promised a favorable intersection of freedom, power, and looking like a cool skeleton.

The now-undead Noctomezo wreaked havoc throughout the centuries, stealing the souls of only the most beautiful of creatures to fuel his power. Unfortunately, his flirtatious ways would eventually be his downfall-- a stray pickup line offended a lich much more powerful than he, and his power was stripped from him, leaving only his phylactery to bind his soul to the material plane.

The phylactery, a cape made of purple velvet, was eventually found by a hapless toymaker, sewn into the world's most cursed teddy bear, and adopted by an unruly goblin child. It's the circle of life.