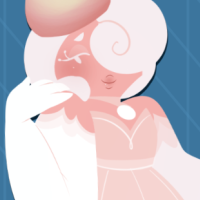 No one's really sure. Even though her own planet's residents looked similar to her, she seems to be made out of sweets and is a bit of an anomaly...

Insects, anything furry or hairy that might get stuck on her (it's such a pain to get out!), too much heat (it causes her to kind of harden up), being ignored, fish (as a food), dirt and grime, hurtful internet comments, foods with no sweetness, dark colors, strong wind, rain, thunderstorms, rude people, being bossed around.

Zephanie is more of a listener than a speaker, but don't mistake that for her being shy or nervous! She always has a warm aura around her and a comforting smile, neither of which ever seem to falter. She likes being around others, but feels she seldom has anything particularly interesting to say unless she's being spoken to specifically. She's relaxed, calm, and hard to get any sort of severe reaction out of. She absorbs physical and emotional blows with ease, and the aura she gives off alone is often enough to keep those with sinister intent away from her. Zephanie's always just too nice and too unaffected... harassing her and getting next to no response tends to weird people out.

Zephanie is a gentle but blunt person who doesn't lie all too often unless it's as a joke, something harmless, or something to keep Heaven and Hell Colleges from targeting her for attending both schools. She's a coy and coquettish and will compliment others without hesitation. She likes to see people get a little flustered, but the truth is that she mostly enjoys receiving attention and affection in return; she often spoils people with the hope that she'll end up being spoiled in return. She can be a little manipulative and doesn't lose any sleep over it, though to be fair it's not like her intentions are ever super nefarious nor are her methods cruel.

Zephanie doesn't consider her life story to be anything particularly incredible, but Heaven and Hell College would disagree. Nothing about her early life is known, and she seems to have only popped up on anyone's radar when it became evident that she had taken over an entire planet.

It all started pretty innocently, when Zephanie decided to use her powers to open up a dessert shop. It didn't take too long for it to become popular, and it took some time for Zephanie to figure out it was because the sweets she created had an inherently addictive quality to them due to their magical origins. At this point, concerned about the moral implications of profiting off of the increasingly brainwashed masses, Zephanie closed down shop and decided to find a new career.

Ha! Just kidding. If anything, that only encouraged Zephanie further as she noticed the effects her unintentional hypnotism was having. Crime rates dropped straight into oblivion, people lived healthier lifestyles to justify being able to visit her shop more often, and everyone seemed incredibly happy. Furthermore, everyone would obey her every whim and shower her with affection and gifts to gain her favor. There was really no downside! The memetic effect became so intense and widespread that even those who refused to try her desserts found themselves under Zephanie's spell, infected by the influence she had on those who worshiped her with gusto.

As her shop became more popular, word of Zephanie spread across the tiny planet she lived on. People came from all corners of the world to try her confections, and eventually she started traveling across the world to spread her influence. Within a mere few months everyone was eating out of the palm of her hand. Every war, every conflict, every little negative feeling was quickly swallowed up by adoration for Zephanie, who used her influence to better the planet and manipulate the peace to encourage the planet's populace to grow and develop the way she wanted it to.

This quickly attracted the attention of Heaven College, who promptly invited her due to the fact that she managed to turn an entire planet into a peaceful heaven. It was sort of by force, yes, but if anything that was just a bonus for Heaven College's increasingly corrupt leaders. Little did they know, she also received an invitation from Hell College at the same time due to her impressive skills capable of rivaling any given pride demon.

Of course, she kept it on the DL once she realized how the schools felt about each other, particularly Heaven College toward Hell College. But, really, it wasn't that big of a deal to her! Not needing to sleep, she'd attend Heaven College during the day and sneak off to the far more relaxed Hell College at night by exploiting an unguarded point between two unintentionally (supposedly) linked buildings on each campus: Maple Manor and Chestnut Chateau. She's made it through an entire year without being punished for her ~betrayal~, be it due to it having gone unnoticed or due to any aware parties not particularly caring.

Zephanie has the power to create, control, and manipulate... desserts...? She can make any food that's considered a dessert appear out of thin air and manipulate it to her liking, often creating candy-themed weapons to utilize when caught in a fight.

The desserts she creates are the most delicious things anyone who eats them will ever enjoy, so she's certainly abused her power to win contests and bribe others before. Those who consume them frequently enough can find themselves becoming addicted to them, and with enough exposure she becomes able to bend their minds to her whims. This is because the things she creates with her magic are technically extensions of her soul, so anyone who consumes enough of her desserts is creating a soul bond with her. This has prompted Heaven College to classify her as a charity-class angel, while Hell College classifies her as a pride-class demon.

Zephanie is also capable of consuming souls but is unusual in that she can consume someone's soul and then promptly return it. She harmlessly absorbs the outermost "layer" and then gives it back via magic, which might result in a slight loss of power but otherwise can be compared to scraping off the dead layer of your skin to make your skin softer. It's not particularly hazardous, but she doesn't actually need to consume souls to survive and will usually only do this if someone's become particularly addicted to her and needs to be "reset".