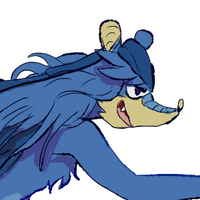 Saving the world from evil and also studying maths

Character traits: Smart, loyal, a bit too proud for his own good, which causes him to act before thinking, and tends to show-off, day-dreams, jealous of people better than him, but he can admit to his faults and mistakes.

Specific traits: Hates clothes, very fluffy for an armadillo + whiskers, usually walking with his back arched and chest out, kinda tall for a kid his age.

Accessories (*optional): *little wrist pouch for money or berries, *a book, *a notebook

0: Born to an aristocratic young couple who owned a mansion over a big forest yeah! Dad was the more 'aristocratic' one but he was also aristocratic and wealthy only thanks to parents, was awful at business himself and was getting into debt, the "if u don't gib monie we kil" debt which his wife doesn't know about.

2: Mom is pregnant with younger brother, dad skedaddles leaving just a goodbye note after him, people after him don't know that so they burn down their house without dad inside and go after the rest. The little family flees and Tadeusz gets lost in the forest oh joyyy.

2-6: Time of getting raised by feral wolves Mowgli style while mom thinks he ded because like they were assassins after them and everything.

6: Starts exploring about because curiosity, meets two schoolboys who are amazed by a wild boy, they start meeting up more often, schoolboys teach him basic words and give him a schoolbook when vacation time comes. He is very fascinated by the book and starts attempts at reading it, and learns the thing slowly despite the wolves being very angry over him disappearing. So he leaves because whatever they weren't even his real parents.

9: Starts meeting people and learning their language better. Meets Jescoe, a witch doctor living in a hut in the forest. Warms up to him aand suddenly lives with him, learning even more and more about Mobian life. Also Jescoe is a fantastic dad who buys him many more books, and soon Alpha goes everywhere with a book and reads like crazy, mainly fantasy and knight and pirate stories. That's also when he gets his name Alpha.

9-11: Also meets Axel who really likes Jescoe and he considers Axel his uncle. Everything is fine and dandy until Jescoe just decides to suddenly die, and then his corpse disappears, and Axel gets shot in the head and survives that, but is very sick. Everything is weird and Alpha just stays at the hut, even though it slowly gets really filthy + one day some demon and Jescoe just come and slightly mess it up even more, with Jescoe for some reason trying to kill Alpha. It was all very very confusing. Then Jescoe disappeared again, to reappear, but in a completely different form, and with completely different powers. He's done a few very messed up things including kidnapping a child so Alpha could play with them, so Alpha fled together with the child and decided to live on his own for a while.

11-12: Living on his own for a while, in a city at that (because frankly he was too scared of sitting in the forest, knowing that Jescoe is there), made him freeze off three of his fingers, get really thin, and overall things weren't great, even though he's met a few nice people who were willing to help him.

12: Then he meets Drastic and Princess, became friends with the first one pretty quickly, and decided to come with them to a church, where he now lives and trains with Drastic. He also meets Star, who's not in that church, but she's really cool and a witch, kinda like Jescoe, and she made his lost fingers grow back, and Alpha hopes he'll get to learn witch stuff from her. He also got back to reading and writes his own little stories a lot, and he starts visiting Axel again, since his uncle is very lonely. He got a book about maths from him recently!

14: Reunited with Milo recently! Glad to hear he's both studying in school AND has a nice home now. Despite him being a demon, Alpha doesn't really feel he's evil.. speaking of, him and Drastic and Vince are having fun with comic books and dreaming about how they can be superheroes once too! Vince even gave him a superhero name - Swift Wiiiiiind.

...Except not even a year passed and in their efforts to become heroes, Alpha and Drastic kinda... ruined things for a lot of people when Drastic decided to attack Milo and his mom. Turns out, Milo's mom could be secretly evil. Turns out, the church turned Drastic away even though THEY told him demons are evil. Turns out, all adults still suck.

Well, that's fine. Alpha and Drastic don't need any adults. Alpha is practically an adult himself. He can live on his own just fine, with no-one to help him, while still being a good person, and he'll PROVE it to everyone.