XueHu has a habit of giving people a cold shoulder due to his past where he felt betrayed by people. Hence he doesn't easily warm up to people and is quite cynical. Acting slightly hostile to people he is not acquainted with as he fears of repeating the history. However, it doesn't change the fact that he is extremely hardworking. Ever since he was born he has been constantly focusing on his future and goal only. Resulting himself to become self-centered as he only focuses on what will benefit him and doesn't enjoy doing volunteers or work that wouldn't help him anyhow.

He understands the most on the efforts he puts in everything hence he is usually calm and is strong against pressure. XueHu is also confident in his abilities and can analyze his limit. He will never attempt to do something he is aware of is out of his ability. Furthermore, he is also capable of adapting to most type of situation and environment. Though he is uncooperative and is most likely to have a hard time to communicate with people. XueHu would not easily listen to people's order if he believes his idea is more logical and effective.

XueHu's father was an actor while his mother was a singer. They were both successful, however, retired as soon as their first child was born. Among the 4 siblings, XueHu was the youngest and he was constantly overshadowed by his talented elder siblings. He would work hard to gain his parent's affection but his effort was all futile. His parents only bothered to spend their time with his siblings and would leave XueHu with a caretaker.

Luckily, his teachers and classmates were nice to him, allowing him to feel the love that he was unable to obtain from his family. But those time didn't last long. The moment people found out about his background, people around him immediately split into two groups. The ones who were envious and the ones who wanted to use him. After that, XueHu instantly distanced himself from them and would stay alone unless forced. To him, it was an extremely devastating event and it made XueHu felt lonelier.

The only time the young boy could see his family members, was over the television screen. He'd watch his parent's show to fill in the void, which eventually got him interested in the show business. After telling his parents, they immediately allowed him to take acting, dancing, singing and other lessons that will be useful. Although it was painful whenever his lecturers and peers would compare him with his siblings, but he knew that being able to do what he liked was already a big privilege. At first his parents showed some sign of expectations until XueHu went to several auditions and failed all of them.

During his middle school, XueHu made sure to choose a school far from his elementary school. This time putting extra effort so people will not realize his identity. Wanting to gain more experiences, XueHu joined the drama club. It was obvious that XueHu had the ability, but he was never given any significant roles. This was due to the fact that people hated XueHu's cold attitude and was considered as "arrogant".

Although he graduated without getting a decent role, he was scouted by a highschool well known for its drama club. Not frequent but there, he managed to get the main roles several times and the sensation of standing on the stage felt completely different. The applause felt extremely satisfying and the boy can't help to crave for more. He successfully went to university and started to apply for some audition as well. However, he was never chosen since his siblings would always apply for the same audition and get chosen instead of him.

After years, finally, for the first time, XueHu was chosen. Not his siblings but him. He could not describe the happiness he felt. Not to be mentioned, he was to be the main lead of the musical play directed by a well-known director. His parents showed a positive reaction and praised him. Two of the elder siblings was happy for him too, but one of them did not. That brother felt ashamed for being chosen as XueHu's substitute. He couldn't admit losing to someone he believed to be inferior to him. Feeling overjoyed, XueHu failed to realize the hatred directed at him. He'd prioritize the practice for the stage over everything and strived to be the best. All his efforts were finally rewarded, or so he thought.

Time flew, and the day of the performance was gradually approaching. XueHu received many compliments from the co-stars and everyone had high expectations for him. The boy was opening his heart and willing to interact with people even outside the stage. Yet his chance to change was stolen away from him. ーDuring the final rehearsal where no safety mat will be used, an accident occurred. The sturdy wire that was supposed to hang him above the stage was easily severed. The last thing XueHu saw was the surprised expression everyone was showing. But there was one person who caught his attention. The only one was smiling and wore the same outfit as him. The face he could never forget, his brother, and the understudy of his role. Just like that, XueHu's life was forced to shut its curtain. 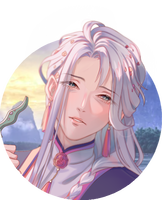 MISSION 4: BATTLE FOR THE THRONE