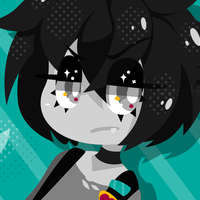 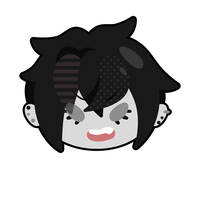 "Give me the cake and leave."

● Sam is 100% grump with a sprinkle of hateful on top. They like to get their own way and is quick to make enemies because of this. He doesn’t like people getting close to him emotionally and will push people away via ignoring, avoiding or emotionally hurting others.

● His ability is called Energy Threading. It means he can literally read people like a book. But it’s pretty exhausting on him

● Pretty much constantly hungry because of his ability.

● His ability also means if people touch him he gets a burst of information about the person.

Sam is small and wears a lot of baggy clothes because of this. They’re mostly hand-me-downs. When he does choose clothes to buy they tend to be monochrome blacks and whites but he does own some purple and green stuff. He has black spiked hair, grey skin and silver, somewhat reflective eyes. His eyes appear to glow in low light but if there’s no light at all they do not glow. He has 3 piercings on his right ear and 4 on his left but sometimes doesn't wear any.

Sam has always struggled with people. Mainly due to his ability. Being an Energy Threader means that being in a room with an unfamiliar person can be exhausting. It also lead him to grow up pretty jaded. He goes through his life seeing peoples selfish motives and intentions laid out plainly in front of his very eyes.

Sam was adopted into the Warschauer family at 8 years old where he was able to receive an education and some much needed love and affection. It did take him some time before referring to Ichigo and Grant as Mom and Dad though.

Having very little in the terms of education beforehand Sam’s brain was like a sponge, absorbing any and every piece of knowledge it could get. Through Grant’s teaching Sam quickly found his main interests were mathematics and biology, specifically Biomedical Engineering, Cognitive Science and such. Much to Grant’s dismay as he only had a limited knowledge on those subjects. (“Why does this smol angry child like this stuff??”)

He was finally able to receive an official education at Skylark Academy when he was at the high school age along with his brother Peight. It was extremely hard on him for the first few years but getting used to classmates threads eventually happened over time. It did mean at the start of every school year he'd avoid the first years like the plague.

Following his brother he decided to sign up to assist Data Collectors also but in the medical field as it was not too unusual for younger students of Skylark to shadow an older professional. The person Sam was assigned to was Nao, a professional in both medicine and Cognitive science. A strange, mostly quiet friendship was struck up between the two over time and Sam quickly grew his skills in the profession.

Peight is his adoptive brother and is probably one of the few people that Sam feels relaxed around. Peight was friends with Sam before Sam was adopted into their family. Sam is slightly protective of Peight

Dylan is Sam’s older adoptive brother. Sam knows he has Dylan wrapped round his finger and takes advantage of that fact sometimes but despite this Sam respects and trusts Dylan. They enjoy out sarcastic-ing each other.

Nao is Sam’s senior in the medical field. The two of them have a silent respect of each other even if Sam berates him in front of others Could be classed as friends??? Maybe??? .