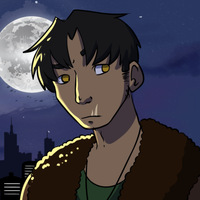 Alaric is a hot headed werewolf who is very strongly competitive. He's up for any challenge you'll throw his way ! He likes to fight for fun and loves being outside. Behind his façade of big bad wolf he's actually very soft and caring, especially with his family.

He's indian so please don't draw him too light-skinned. He has a ton of little scars all over his body (I don't even keep track myself) but the more important one are the two straight scars across the left side of his mouth. He also has many of them on his knuckles. He often wears green and sports dog tags.

Alaric is a werewolf coming for a little countryside town in England. He spent all his life in competition with Alexander, a vampire from a family in feud with his own. The two of them were always compared and pushed to compete with one another to establish the superiority of their clan. While Alex didn’t really took this competition to heart, it meant the world to Alaric when he was younger. But no matter how hard he worked, Alex was always stronger, smarter and faster. One day he was sick of it and just gave up everything, his family threw him out and he had to live on his own in the streets, hanging out with other rejected wolves like him. He however kept his rivalry alive with Alex, consistantly picking fights with him every time he got the chance. Until one day Alex announced he didn’t want be his rival anymore. All of Alaric’s pent up rage exploded, they beat the hell out of each other while Alaric poured out all his hate about him and their families, and how Alex had been his only anchor on reality after his breakdown, if he wasn’t his rival then there wouldn’t be anyone in his life anymore. After bruises, shouting, clenched fist and insults, Alex welcome Alaric into his home, the two making amends and letting go of the past. Thus begin a phase of housemates with a pretty weird relation, roomates ? Friends ? ..more ? It took them a while to figure it out but they eventually opened up about their feelings. They are now married and have adopted a little girl named Mia He now works as a coach in a big gym, mainly teaching boxing !

Alexander • Husband
His former rival turned lover, turned husband. He cherishes him more than anything. He's one of the few persons that really understands him and that he trusts completely.

Mia • Adoptive Daughter
The sun of his life. She's the cutest little girl ever and can do no wrong in his father's eyes. He affectionately nicknames her pup. (she's half werewolf and turns into a wolf cub during the full moon)

The Squad • Found Family
Basically his new family now. They mean a lot to him and is ready to sacrifice a lot of things for them.