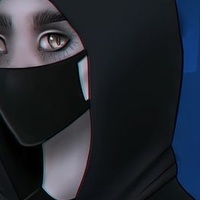 Beau is a Nosferatu neonate, who got embraced fairly recently. His sire - a mysterious kindred whom Beau had only known by her username - left him right after it happened and went into hiding. Since the embrace was unauthorized, it was technically a crime to the Camarilla, after all. Before leaving, however, the sire has left Beau some basic instructions on how he should act in this new state - she also promised him that once the situation calms down, she will come back.

Born and raised in the outskirts of Los Angeles, Beau had a rough upbringing. Often described as a "mistake" by his mother, he was a result of a one night stand - he had never seen his father, nor had any idea who the man even was. The only thing Beau managed to conclude was that it was a regular customer in a shady bar where his mother used to work - a place from which she was fired her right after she got pregnant. With no money and natural resourcefullness, but instead with a child on the way, she found herself in a harsh situation - with each passing day she grew more bitter and angry, frustrated with her life choices, yet unable to change a thing. A few months later, her only child was born.

Beau was a quiet, yet strangely optimistic boy with a huge imagination. He spent most of his early years playing on his own, trying not to get in the way of either his mother, or her suitor - a haggard-looking man who always smoked cigarettes in the tiny apartment he was paying off for them all. While the adults weren't violent or physically abusive, they just didn't seem to care much about the child. Beau quickly got used to the fact, that it was for the better - whenever he tried to spark any interaction, he was usually brushed off or scolded for wasting their time. The boy learnt how to enjoy spending his days quietly, either on watching the tv, drawing or playing with whatever he could find in the apartament. He also adored reading and took every opportunity to do so - no matter if what he currently had on hand was a fairly interesting novel or a telephone book. The older Beau got, the more time he spend outside the small apartament he shared with his mother and her partner. There was one particular place that he frequented almost on the daily basis - an internet cafe called "The Surfing Cat".

The internet was Beau's escape from the everyday life. He enjoyed cracking jokes on various forums, finally being able to connect with other people. He was happy to read on topics that interested him, not only the ones that he could find in the books laying around the apartment. He learnt how to download newest songs and began shaping his music taste. He was simply fascinated by the amount of information that came with the web and felt like he suddenly gained access to the entire unknown world of possibilities - all in a fancy box with a colorful display. Little did he know that it would also be his link to a person, who would eventually change his life forever.

Beau's relationship with a person, whose username was Suitsu_E2 started from a single, innocent question concerning favorite albums. It sparked a conversation that would go on for the whole next year - dozens of mails would be exchanged on a daily basis between those two. Beau finally opened up about his situation, but remained rather positive and upbeat, which was a trait that his new friend seemed to enjoy - especially considering the fact the she mostly seemed kind of sad. Suitsu didn't talk that much about herself - she mentioned that her home situation was rather hard too, and that she felt quite lonely. She also often thanked Beau for keeping in touch with her and told him how much she enjoys messaging with him. They kept on sending each other songs and interesting articles, but never pictures of themselves.  Beau didn't see anything wrong about it - he was simply glad that he finally found a friend. For Suitsu, however, it was something more.

One night Beau woke up in an unknown, dark place. He felt terrible, like his whole body was burning - on top of that he had no recollection of the events that happened before. As he stood up, he noticed the only item that he could make out in the darkness - an old, cracked mirror with a note sticked to it. Upon approaching, he saw his own reflection - the sight shocked and terrified him greatly. He couldn't make out any familiar feature - instead, there were burns and disfigurations all over his body. He couldn't contain his horror as he realized, that the most affected area was actually his face - with a ghostly pale eye staring deadly in the mirror.

It took Beau a while to contain his lament and panic - as he shakingly tear the note off the mirror, he saw a rather neatly written words:

"I can imagine how scared, desperate or even mad you are now - I've been through it all too. You must be hating me and it's really hard to think about - but I know it was the only way our relationship could keep on going...I apologize, but I just couldn't let it slip…I'm pathetic, I know. I hope one day I will be able to make it all up to you and you will understand why I've done it - though I don't expect you to."

The letter went on, describing every possible thing concerning his new state of being - the rules of the so-called kindred society, the way he should act from now on, the things he had to do in order to keep on surviving...it also ended with a plea to look for a particular person called Zed - someone who was supposed to help Beau get through his first nights as a Nosferatu.

As much as Beau didn't want to believe it all, he had to face the fact that he was changed forever. With the instructions he was left with, he managed to eventually find Zed - also another one of his kind. Unfortunately, the only means of contact Zed has ever had with Suitsu was also through the internet - meaning he had no idea about her current whereabouts. As Beau learnt, she entrusted Zed with her plan of turning a mortal into a vampire, however he didn't think she would actually go through with it. Suitsu's actual identity remained a mystery, though in the letter she left for Beau she promised that she will come back once she feels it's safe.

In order to make money and gain some trust from the community (...as the letter left by Suitsu suggested to do), Beau started doing various tasks for the older kindred - whatever it was spying on someone, retriving a lost item or passing messages to other vampires. On a particular night, one of his tasks took Beau to a well-known modeling agency that was run by another kindred - a Toreador named Lamia. Quite surprisingly, there was something about Beau that made the girl took a liking on him, though she couldn't exactly pinpoint it - from now on, she took him under her wings and they would see each other frequently.

After his first weeks as a vampire, Beau actually started to enjoy this new lifestyle, seeing it as an upgrade to what he had before. He eventually got over his new looks and let his naturally positive character break through - he still could do much more than he could before. On top of that, he had super powers now!