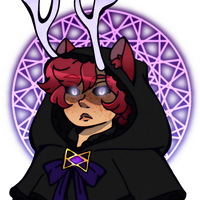 🌙 Place of Living: Technically homeless; her labyrinth tends to stay in the Common Magician Quarter

Abrasive isn't a word you'd think you would have to use to describe the sweet-faced Reverie, but here we are. She's aloof and seemingly apathetic, blunt to the point of rudeness, and can be straight-up mean when she wants to be. She's also a full-blown recluse who hates being out in public, so her social skills are non-existent. However, she is paradoxically desperate to keep her more foul moods in check, and wants to stay on people's good sides, no matter the cost.

Reverie's memories are a little scrambled, but what she remembers is this:

A spirit approached her with a deal of a lifetime: help it and its kind fight monsters, and they will grant her any wish she wants. She took the deal and joined the ranks of the Astral Knights, others that made the same deal and protect the world from Nightmares that plague the world. She fought beside them, got more and more disillusioned, watched her life fall apart, had a major falling out with someone...

...and then she woke up in Mahou Wando, with no idea how she got there and with powers mimicking those of the monsters she used to fight...