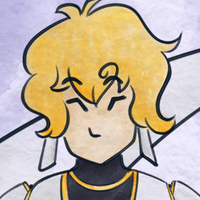 The embodiment of wishes and desire. He is the sage recorded the most throughout all of history due to his closeness to humanity. Despite willingly participating in humanity his appearance is usually taken as an ill omen as many have perished to his personal muse. His position amongst the sages is almost that of a liaison between the mortal plane and ethereal kind.

Muse: The End of Desire

The sage that loves humans the most. He finds how they struggle interesting and can't help but meddle with their affairs. While usually wearing an amused smirk, he can grow cold and bitter towards a person who he has determined has deviated from the proper human order. As an embodiment of human's wishes, he generally has a positive outlook, but can be a realist when it calls for it, even downright cynical at times. He also has a bit of a habit of providing just the right amount of information to be useful, but not enough to solve problems. Lying by omission would be a good way to describe it. Why he does this? Well it wouldn't be nearly as interesting if he just gave out all the answers

Humans are so hardy yet fragile creatures, the fact that they went from nothing to mastering the planet they live on feels like an underdog story to him. Plus the individual struggles of humans he interacts with is like a soap opera for him that he can directly influence if he so chooses. Despite all the flaws with the modern human public, he still loves humans. While he can directly interact with individuals he can't sway the public consciousness in any meaningful way, so in that regard he has to kind of go with the flow. Like the other three immaterial sages, Sahji advances with the collective consciousness of humanity. One thing the public consciousness can't change his opinion on is his views towards life. He will always view someone who willingly chooses to being harm to another  as a bad person, despite what their intentions may be. He also is critical of people who allow themselves to be treated in such a way.

Relationships with the other Sages

Luca - These two are on good terms. They both want to see humanity progress to the next level and enjoy the humans they grow attached to. Sahji can grow weary of Luca from extended exposure to his unending optimism and will usually ask the Life Sage to kindly leave.

Seres - "Knowing the ending of the story is so boring" says Sahji. And Seres being the way he is will inadvertently (or maybe purposefully) spoil key plot threads Sahji is keeping an eye on just to mess with him. Sahji once tried to tell Seres "Well this is why the other sages don't like you." to which Seres replied: "Yeah, I know."

Kitori - This is a point of contention for Sahji. Victory is one of the strongest desires out there, however Kitori as a sage has the most blood on his hands and that bothers the human-loving Sahji. Kitori is respectful of Sahji as the desire and wishes of warriors to triumph is what makes Victory even a concept.

Marovo - Sahji generally likes Marovo, despite how stern the Sea Sage can be. Meanwhile Marovo gets annoyed with Sahji's insistence with meddling with mortal affairs, and dragging the rest of the sages into Sahji's self created drama.

Lanvi - Sahji likes Lanvi, mostly because she's a pushover when dealing with the wish sage. She doesn't like to disappoint him, but in the same respect she knows he's a source of drama for the sages and is afraid of his machinations.

Cielto - Like the other two of the Sages of the planet, Cielto is well liked by Sahji, but the same could not be said about Cielto's opinion of the wish sage. Like Lanvi, he's weary of Sahji, but is much more open and honest about his feelings towards the wish sage.

How do they treat their muse:
All you need to do is ask and Sahji will give you the End of Desire. He's even kind enough to fully inform the new wielder of the risks of using the blade.  The resulting mental dilemma is a source of amusement for the sage.

The End of Desire

Sahji's personal muse is a European styled short sword called "The End of Desire" By all accounts it seems like an ordinary blade. Written on the blade itself is "حدُّ الرَغبَة" The legend goes if one takes the blade through their heart with the strongest desire they can muster it will be fulfilled no matter how impossible or improbable it may be. However, if one's wish is not strong enough, it will not activate and will be just a regular sword - that is to say it is irrevocably fatal. Regardless of whether or not the person in question is a God or immortal or otherwise; the "concept" that is their being will come to a close. There is no protection against the decision of the sword.

The earrings Sahji wears are slips of paper known as "Tanzaku". Rather than having wishes written on them, however, this paper will react if a collective wish is strong enough in their presence and a clue on how to fulfill the wish in question will appear in writing on the paper. It is then up to the wish-bearer in question to grant their wish.

The Festival of Hope

Sahji's celebration festival is known as "the Festival of Hope" and is celebrated on January 20th. It's a day where friends and family get together and exchange presents. There is also a celebratory meal where it is usually tradition to bring a dish that is the favorite of one of the attendees or one that is requested beforehand. A common farewell to hear around this time is "I wish your desires end!"

Despite being the sage of hope and wishes, a lot of idioms involving Sahji are quite the opposite, usually inviting misfortune. A common phrase is "that kind of language excites the wish sage" to mean something said is tempting fate for something to happen. Holding ones hands out as if offering the End of Desire is a rude gesture meaning something akin to "I hope the wish sage finds you" again, as a sign of misfortune. Other common sayings cite Sahji laughing or generally having caught his eye.