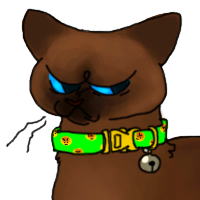 Meet the angriest rhythm guitar player in the world, Hi-hat! Named after the hissing cymbals in the drumkit, since that's all he does really! Hiss and snarl and complain.

Hi-hat is the grump of the band, always upset with everyone and their presence, from his demeanor it seems there's nothing but hatred in this kitties heart and yet... he refuses to sleep alone at night! At this point everyone who's close to him knows he is a needy small little soft boy deep down, but he hates to show it and would much rather be perceived as the misunderstood evil prince of darkness. Hi-hat sounds so over the top sometimes though, it's hard to take him seriously, but he is not afraid to claw off the face of everyone that patronizes him!

In the band he is likely the one that composes stuff the most, but that's because he has to rewrite his ideas a lot since they tend to be...too much sometimes...and the rest of the cats will have him tone things down much to his displeasure, they let him go all out when singing and playing the guitar though, and he has a lot of repressed stuff to yell out!

His collar is the shiniest accessory any of the cats have probably, and the loudest one too, and despite his constant complaints he cannot get it off as his desperate kitty butt keeps getting lost while escaping to find love.