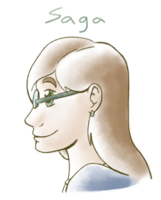 When Saga was a kid she wasn't allowed to leave on a Pokémon journey, but after growin up a little she tamed and caught herself a wild Rattata. Later on she obtained some other creatures, too, when she left on a "short trip" to a close-by city, which eventually turned into a nearly year long journey. During that she also met Caramel, a bizarre but nice girl, who then invited Saga to visit her home region Johto. After staying some months in home Saga decided to take the invitation and left for some more adventuring. This time she got to know Hitoko, who hired Saga to take care of her mansion as well as her vast collection of Pokémon when Hitoko herself travels around the world. Saga took the job and is still this day living in the mansion and trying to keep count of Hitoko's numerous Pokémon.