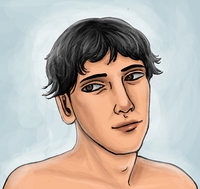 Joel is one of Sam and Frankie's best friends. Sarcastic, easily offended, but with a heart of gold (or so Sam and Frankie believe in high school), Joel enjoys engaging in "verbal jousts" with Sam.

Joel attended the same high school as Sam and Frankie. He met Sam in Literature Class as well as in Debate Club and after debating about religion (Sam and Joel are both atheists), Joel - impressed by Sam's sentence structure and persuasiveness - decided to befriend him.

Generally, Joel is quite introverted when he is not debating and prefers the company of books (usually about logic, debate, accounting, or mathematics) to people.  However, he does have the habit of always making his opinion known, whether it's welcome or not.

Joel's parents immigrated to the US in 1900 from southeastern Poland. Like the deli owner Harvey Feingold, Joel's parents are also Galitzianers.

Despite his parents' desire for him to learn more about his roots, however, Joel shows little genuine interest in being anything but a red-white-and-blue-flag-waving American. In this way, he's a foil to Sam, who is much more immersed in his Yiddish identity.

Read more about Joel here on our website: https://www.fortunusgames.com/post/joel-farber