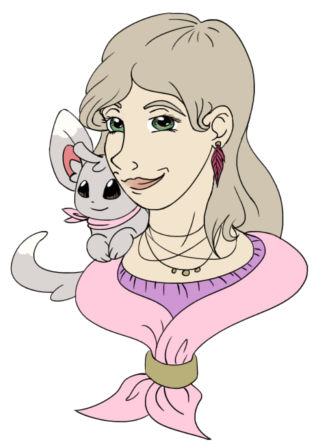 Open, kind, lives keeping her head high in the clouds.

Illia is a lively and expressive woman. She has light brown (maantienruskea in Finnish) hair and green eyes. Her clothes are more often than not airy, pastel-colored and even somewhat bohemiam, which also summarizes her nature as well as her aesthetics pretty well.

Illia was born in a country far north from Misrea. She was studying to become a kindergarten teacher when she met Caspar. The two quickly fell in love and got married, and soon enough Illia became pregnant and gave birth to Reliam, the couple's only son. Eventually the small family decided to move to Misrea to settle up permanently. Before Reliam went to school Illia stayed home to take care of him, but after he was old enough his mother took a part-time job as a kindergartner.

During Next Generation Illia still does what she does best: fuss around her family and especially her grandkids who she loves (and spoils) more than anything. Her life gets shaken up though when her husband suddenly dies to heart attack. That naturally makes Illia very upset and even lost for a while, but eventually she decides to live on as well as she can. She moves to Mehabay and fulfills her life-long dream by starting to go to Pokémon Contests as a hobbyist coordinator.