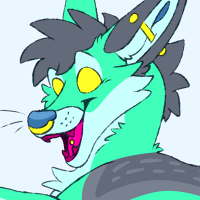 Posted 18 days, 8 hours ago by ThePoisonJackal

I have a bunch of designs for sale in this folder https://toyhou.se/ThePoisonJackal/characters/folder:393280/tags:1/tagged:sell please check them out!!

Posted 4 months, 4 days ago by ThePoisonJackal

I am once again asking you to join the hoofhissers.

It's the one year anniversary of the species! And anyone who has been following me knows that I've been really into them recently. They've got in-server currency so you don't have to spend real money if you don't want to, you can make so many cute hissers, and its a very active and friendly server with lots of events, raffles, drawing challenges, etc. Even if you only make one hisser ever I think it's awesome and would encourage you all to join.

Posted 5 months, 26 days ago by ThePoisonJackal

Hey! I'm getting into this original species called plushmaws. There's a cool event going on and the species is a really awesome combo of cute and creepy. You should check it out! Here's the discord - https://discord.gg/QaxnVgWvcD

Posted 7 months, 20 days ago by ThePoisonJackal

https://toyhou.se/ThePoisonJackal/characters/folder:947203 Trade folder! I want as many of these characters gone as I possibly can, so please offer characters, art, anything else you can think of (you can even just ask and I may just give you a character)

You can make your offers here, or dm me, or in the comments of the character.

Posted 2 years, 10 months ago by ThePoisonJackal

Posted 3 years, 6 months ago by ThePoisonJackal

A girl immune to radiation and her hyper intelligent jackal try and find what caused their society to crumble.

The King of a tropical paradise gets lost at sea, and his only hope of getting back is a little band of pirates.

Lady Daisy Lovett gets promoted to a Duchess. She fears her new responsibilities, but with a newly appointed personal guard, she might not have to be alone.

Sage, a blueblood changeling, recounts the events of her life, from the rejection in her own family to falling in love with a shapeshifter like herself.

The Werewolf of Brighton

Discovering a lonely, confused werewolf in the allyways around Brighton, piano player Margot finds herself torn between fear and love.

Going through the trials of their senior year of high school, six friends try their hardest to stay together as they find out who they are.

A lonely niteowl and a catlike shapeshifter show an abused cat a new way at looking at the world.

Four gems hide in a cave and attempt to reconnect with Homeworld.

A group of abandoned pokemon attempt to find their original owners. And, a couple of trainers work their way to the top to become pokemon masters.

A group of two orphan girls, an eccentric sphinx, and a strange masked human attempt to document monsters as they start to integrate into human society.

Three dogs unlock the mysteries of an abandoned radio station. They have drifted apart over the years, but now they must get over whatever held them back.

In the aftermath of a nuclear meltdown, a strict, class-based society is enacted in the wake of a giant corporation. An Alpha and her two Betas work together to bring down the tyrannical company from the inside out.