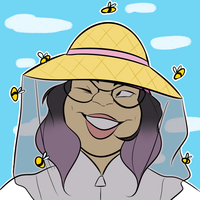 Posted 4 years, 6 months ago by selphie_trabia

[Sand Palace RP - Beach Cave on the Edge of a Forest]

We begin our story in beachside cave just at the edge of a forest.  The waves lap against the shore, the water turning a lovely peach pink and yellow as it reflects the dying rays of the setting sun.  There, a slightly chubby crafter stands, practising his healing magic.

Riju giggles quietly when he hears a rustling behind him, followed by a soft grunt. He turns around as Bennedikte comes out of the brush and runs to give the robber a hug."Bennie!!" Bennedikte gently returns the hug, his twisted mouth forming as much of a smile as was possible. He takes Riju's parasol from him and holds it for the smaller dragon. "Little friend want play?"

Inside the forest, a number of stardragons in hooded cloaks check their weapons as they stalk behind their prey.  They've been following their quarry for some time now, at least a few days, though they've been careful to stay out of sight.  They stop, just before emerging from the brush, and lay low, watching as Bennedikte greets his "little friend"

Riju smiles and nods, pulling away from the hug. "of course! C'mon, we can make flower crowns again, or look for seashells!" the crafter turned around and started towards the nearby cave, but not before taking the parasol back and sticking his tongue out at the older man.

One of the hooded stardragons, an Eater, makes a gesture with her claws.  The other stardragon hands her a two reed pipes.  She loads a feathery dart into each and then continues to eye her quarry.

Bennedikte makes a low rumbling sound as he goes to follow Riju, shaking his head.the small crafter bounces slightly as he walks, tail swaying from side to side and twirling his parasol happily.

She lifts the pipe to her lips, takes aim and blows.  The little dart flies true, sticking right into the middle of the robber's back as it's turned towards her.  The sting of the dart is minimal, though it has been loaded right up with a strong paralytic.

Bennedikte freezes at the sting, a loud growl escaping him as he soon falls limply to the ground.when Riju hears the thud he slows to a stop and his eyes narrow, his free hand balling into a fist. "Bennie? You ok back there?" he calls over his shoulder, everything about his body language suggesting that he's ready for a fight.

The Eater blows strongly into the tube and the dart makes a thwoping sound as it misses the smaller target, landing point-first into the sand.  She curses under her breath and fumbles with another dart, trying to load the thing into her pipe.  At the sound of the second dart leaving the pipe, her companions start to uncurl, a net strung between them, but she holds up a fist and they hunch back down in the brush, tails flat against the ground.  Not yet.  Not yet.(edited)

Riju immediately spins around and looks for the source of the darts, preparing to charge at them. "no, little friend run!!" Bennedikte growls, trying and failing to get up.

The source doesn't seem all that difficult to spot.  Now that Riju is looking, he can see the crouched figures in the underbrush, though their brown and green cloaks make it difficult to spot them, the sunlight just doesn't quite reflect off their bodies in the way that it should.  The Eater lifts her pipe to her lips again and huffs the dart out.  It flies towards Riju...

Riju whips back around and hits the dart away with his tailgems, not even bothering to wait before he bolted for the cave.(edited)

The Eater throws her reed pipe on the ground in disgust and stands.  Her compatriots stand as well, rushing forward.  They wrap Bennedikte in the nets and start to drag him away.

"Watch the claws!" The Eater shouts at her companions, "You don't want to get infected."

Bennedikte growls and glares at them, before trying to see where the small crafter was.Riju watches from just inside the mouth of the cave, the slightly darker environment making it easier for the deepforge boy to see exactly what was happening.

The group look fairly practised at what they're doing.  They net Bennedikte expertly, dragging the robber across the sand back towards the brush.  One of them whistles loudly and... then there's the racket of a cart as it emerges from the forest.

"Load it in, boys!" The Eater calls

"But what about the witness?  He might go looking for this one."

Bennedikte snarls. "you no touch him!"

The eater shrugs "Who cares?  We're paid to deliver, not to stop anyone from looking.  Besides, that crazy princess gives me the creeps."

The cart groans as Bennedikte is shoved into an open cage in the back.  The metal box is barely big enough for him to stand in.  The hunters slam the cage shut, do up the bolts and fasten them with sturdy padlocks, leaving him in almost pitch darkness, save for the light coming from the airholes in the sides.  Around him, Bennedikte can hear the scratching of claws against metal and moans of other severeblights.  It seems the hunters have been busy.

Riju sneaks out of the cave when the hunters aren't looking, his familiarity with the area a clear advantage as he gets closer to them.Bennedikte sighs and closes his eyes, rumbling out almost a hum to the tune of a common sea shanty as he tries not to get rocked around too much.

They're clearly unconcerned with his presence, though two of them are keeping watch over their charges.  The cage is pushed against the others, a total of four in all.  The Eater climbs into the driver's seat as the rest of her group pull a net mesh over the cages to prevent them from falling out, then sit in the back.  She gives a whistle and the cart and horses start away at a rather brisk pace, headed back to the main road

And... the beach is as silent as it ever was before the hunters came.

Riju immediately runs back to his house, starting to pack up his things and ignoring his mentor's questions as he gets ready to go after the hunters.

When he emerges, the hunters are long gone, but the blowdarts and drag marks remain on the sand.  But they did leave one thing in their wake.  In their haste to get away, a leaflet has been left in the grass.

Riju picks it up, biting his lip as he looks it over.

It's a notice written in both Standard and Shooter Draconic. "Hunters Needed for extremely dangerous game.  100 gold per live specimen.  Enquire at the Plaza for further details."(edited)

Riju narrowed his eyes and growled softly, shaking his head and heading into the nearest town.