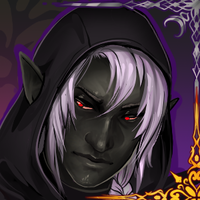 How did they come about? Why did they go deep underground? Did they get lost and just made the best of things Mmmm hilariously, I had it in my head that they were there all along, or are a very ancient subset. Starcrafters are diggers and explorers, they probably just gotta go deeper(tm) and kept exploring and falling in love with the neat underground caverns

Are their digging claws just claws or can they be gems? Yeah why not they can be gems like the Starshooter common trait.

do they have nightvision Perfect nightvision. They can see in pitch blackness, They get reading on their surroundings by picking up the faintest of light reflecting off their surroundings put off by their dim gem glow. I imagine some sort of echolocation and magic is involved as well. They probably chitter. However they handle bright light a little bit worse than their more 'amphibious' counterparts. I'd imagine deepforge crafters traveling to the surface need sick ass blindfolds.

Can crafters adhere things to themselves like welders do to other objects? I MEAN I GUESS? I would assume they could only do it to their shale or scales or horns because ow. Tho! Shale is able to shed, so like, you can stick something to it, but eventually that shale will shed off. Like hair, its attached and it hurts to pull, but its naturally to shed and lose some. If this is a ploy to make the katamari legendary crafter real I swear to god. Are the eyes a mutation? In the way that evolution is the passing on of mutated traits that assist in adapting to environment? Ye. Also they look rad as hell.

Can deep forge crafters be born that way or become that way? Born that way. //gaga But the deepforge is a hereditary evolutionary regional adaptation.

Will they be paler in color because lack of light? Heck yeah that'd make sense. I've been going with darker mostly in my head, mainly because if I'm being 100% honest, they are an homage to the deepholme realm in WoW, which is one of my faves. Think dark with bits of bright glowing colorful gems. I would imagine they have either lighter coloration, or darker coloration because hashtag deepholme aesthetics and multiple options.

I have a mudskipper question, can those fuckers stick tot he roof by them sticky fingers because I am so ready for that Idk if it could hold their weight but im sure with all four limbs stuck they could bllllleeeeeeeep

Do deep forge crafters interact with other crafters or are they outcasts? Not outcasts! A little scary and weird maybe, just because they're different, but it's more like the curiosity of a very distant people with a new and different culture. The different subtypes interact.

Do deep forge crafters get along better with fishers or about the same? About the same, though the deepsea fishers are a little more antisocial.

Do some deep forge crafters develop bioluminecent traits? You darn snootin. Their shale is a bit more ...spikey? It's reminiscent of pillar crystals, and almost all of them glow.

Are they deaf Nope not by default. Though I imagine them to be a little more soft spoken. The sounds and lights of the surface can be A Lot.

-DESERT CRAFTERS- Do they have beards 8)))) and other spikey spikes along like shoulders and back. I'll have to doodle.

Are there swamp crafters? Can they run on water like the Jesus lizard? Nope feet too stumpy. Im sure fishers can with practice. Also cuz thats hilarious.(edited)

Are there desert crafters as spiky as a thorny devil lizard? Fuck yes, Tho anything visual I do have to sit down and do trait development and categorization for. But short answer fuck yes.

Do crafters have any natural defense mechanisms? It would be rad as hell if they had toilet mouth like those lizards but that is not good for my kinks. But they can and will use their tal gems to break your life. They use their tail gems like wrecking balls to break rocks while digging, and their horns to stab and break up rocks. So using that defensively isnt out of the question.

ALSO, As far as culturally. Crafters are generally laid back, happy go lucky, snarky, jokesters. They live for puns, inventing stuff, "Hold my beer imma try something stupid", a bit of a love letter to wow goblins and dwarfs. They love business and trade and making friends and connections. They will even do business with shooters, much to other races ":/". They're a little more polyamorous than most. Generally flirty. Work hard play harder. Drinking contests. HEY LOOK AT THIS SICK GEM I FOUND. Dragons back Isle - Capital, Big trading city hub, lots of forges and creativity, pirate harbor, as you go underground and further under the ocean its more residential Drevilheim caverns - Largely smaller residential type, Drevilheim mountain ranges - More dwarf inspired, more into building shit and carving Western Sicco Gutture - Desert fuckers will mad max all over the place, dope desert racing, desert sailing, Carve pueblos out of the canyon faces Arctic crafters - ICE. SO MUCH ICE. BUILDINGS AND CATHEDRALS OF ICE. Deepforge- Quieter, gentler, in tune with the earth man. strong sense of family and exploration. Surprisingly hospitable, will guide lost adventurers out of the deep