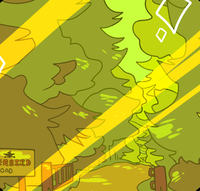 The Post-Panic Universe is the main story universe for my current stories.

In the Panic Universe, a battle between three incarnations of God ended when the creating force won and overlayed a new universe over the old one. In the Post-Panic Universe, all myths are true, and magic comes from belief. Mortals don't know that their world is inhabited by gods, pantheons and ghosts. To prevent mass conflict, all gods have submitted to organization in something called The Goddity System, which ranks gods power and standing by how much they are discussed, mentioned or actually worshiped.

At the top of the Goddity System are the Offsprings - the direct descendants of God in charge of maintaining aspects of reality. There are eight Offsprings, although errant goddess Helene of the Linean gods is known to be their collaborator, and is often included in the group's modern day activities. Each of the Offsprings has their own Kingdom and elemental creatures.
Another key player in the Post-Panic Universe is Calpurnia Vinki, former mortal girl turned immortal servant to the Offsprings. As the Muse of Memory, she holds the true story of how the Post-Panic Universe came to be and knows more about its creator than any of his children.

The Post-Panic Universe can be said to begin in 1960 CE.

Stories that take place in this universe: