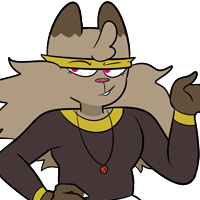 Rat goddess webcomic Comic Character THE WORST aka the best

"Hey Everybody" by Rubblebucket (Survial Sounds, 2014)

Mean queen who's a great manipulator but bad at everything else

Helene, the Queen of Ghosts | Main character in Heroes of Thantopolis | she/her

Once upon a time, the God of Death and the Goddess of Fertility fell in love. The Linean gods were scared - nothing good could come of such an unnatural paring.

Maybe they were right to be scared.

Helene is the goddess of ghosts and the Queen of Thantopolis, an afterlife city filled with the spirits of objects, things and people. Before 1961, Helene was a small potatoes goddess - the Linean gods were minor American folklore, not really considered a serious religion by anyone. But because of her participation in the Great War and familiarity with the Offsprings and their Muse of Memory, they gave Helene the duty of ruling the afterlife of the unaffiliated and nonreligious ghosts that had become the new gods' responsibilities. Since gaining a huge number of new subjects, Helene has had her pride in her queenship increase tenfold, and she takes her duty as queen very seriously and with an air of superiority.

Helene is an extremely smooth operator. Skilled in conversation, she can easily size a person up and determine what they want and how she can use what they want to get what she wants. Manipulative, unflappable and savvy, you will come away from a conversation with Helene feeling like you've lost, even if the conversation wasn't remotely close to an argument. Helene has a lot of pride, and hates to be insulted or put down. Hypocritically, she looks down on all the ghosts who serve her and make up her Kingdom, and considers them to be somewhat inept subjects.

Helen is incredibly selfish. She knows what she wants, and she's often blind to the consequences of getting what she wants. More often than not, Helene's selfish decisions come back to bite her, and are what prevent her from attaining the success she assumed she'd be able to have. It's hard for some to believe that Helene ever has genuine emotions, although there are times when her calculated facade breaks and her true feelings shine through.

As the Queen of Ghosts, Helene wields control over the Ghost Element - the +1 in the Offsprings elemental cycle, and usually referred to as Ghost Energy. Helene can summon and created objects out of ghost energy with the snap of a finger, and manipulate ghost objects just by thought. Helene's weapon is called the Ghost Lantern, which she uses to fire off ghost energy blasts and animate large ghost objects. She seems to have some sort of influence over the ghost she rules.

In Chapter 8, we learn that Helene's influence strips ghosts of their memories, strong emotions and rational thinking, with the intent of making them easily placated and unassuming subjects for her to rule.

In Chapter 9, we learn Helene knows Cyrus's Mom, though the specifics of how they know each other are still a mystery.

Helene also bears the responsibilities of the Goddess of Hoarding, but she rather that not be known, because it's kind of embarrassing. Still, she loves to collect ghost objects, and the entire Warehouse District of Thantopolis is full of things she's collected that didn't fit inside her already spacious castle.

Helene is rarely ever seen without two items of clothing. The first is her crown - the symbol of her rightful and fated rule of Thantopolis. The second is a medium charm necklace that she is often seen clenching or holding. This necklace must mean something to her...

Helene Trivia (from past Q&A's and otherwise):