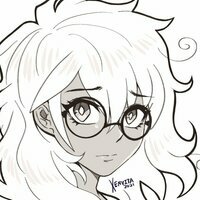 In many friend groups, Sonia Renoir has found herself as the designated "group mom". This is due in large part to her tendency to nag and generally give people a hard time about doing dangerous stunts. This wasn't always meant to be mean-spirited or negative, as she generally does care about her friends and looks out for them. She is a very good listener and always seems to give the right advice in every situation.

Putting others before herself, it's not uncommon for her to spend time in the kitchen baking some sweets before a get together, and for her to never even eat any of said baking; just being content that people are happy.

She doesn't have many aspirations of her own outside of just making people happy. Despite this, she can get annoyed or irritated if she feels like she's being pushed around.

In regards to leadership roles, she will never seek it out, and should someone suggest her lead a group or project, she will sheepishly deny it and suggest the actual best candidate of the group.

Her normal demeanor is quite upbeat, even in spite of her nagging. When she's alone however, the stress of it all takes over, leading her to break down. She is very aware of this and keeps it all to herself, never really letting anyone in, not wanting to burden anyone else with her thoughts and feelings. Unlocked Spells (As of Chapter 87)