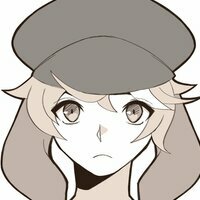 Vinci is two things first and foremost: quiet and loyal. Around people he doesn't know he's typically very quiet and keeps to himself. Not because he's shy, but out of fear of saying the wrong thing. In fact, he can be quite social and doesn't have a problem with chatting with total strangers. Though he can be slow and methodical in his speech, because he's generally really bad at reading people and he's painfully aware of this.

Something he's quite good at is visual arts in general. Painting, sewing, even sculpting; it's as if his hands were blessed by the gods themselves. One might think he's studied all manner of visual mediums, but in fact he's extraordinarily talented at mimicry. There are very few things he can't replicate even at a passing glance. If he got a chance to study a subject up close, he would even be able to replicate a forgery to near perfection.

He hates liars with a passion and would never pass his replicas off as the genuine article, for that  he purposefully adds minor imperfections so someone with a trained eye would be able to spot the difference between his work and the subject he's copying. That being said, if forced into the situation, he would absolutely be able to turn this trait of his off and perfectly copy a subject.

To talk about his loyalty, he's stubborn as a bull, refusing to back down if someone he loves is in danger, even at the cost of his own life. It's to the point where it's his preferred end to his life: protecting his loved ones. On the flip side, if someone he cared deeply about betrayed him, the scars would dig deep and take a long time to heal. Being perceived as useless, even by himself hurts his self-esteem greatly, as he values his strong willpower as an asset of his.

This also makes him a bit of a workaholic. He hates sitting idle and if there's something he can do to help, he will absolutely try to help, even at the protests of his friends and family.

Vinci is someone who will die for you, and wear a smile the entire way.

Species Bonus: Candid Sense -Through increased hearing, the resonator has an innate sense of their target's position in battle, increasing the accuracy of their attacks.
Element Bonus: None
Class Skill: None

Fuoco Fatuo
(Tenuto or Mosso)
Utility Spell. Casts a ball of floating fire. Mosso creates a quick burst of light, while Tenuto causes the ball to follow the caster, providing a light source.

Ghiacciolo
(Pianissimo, Piano, Forte, Fortissimo)
Basic Ice attack. Creates a spear of ice that is launched at the target.

Foglie a Lame
(Pianissimo, Piano, Forte, Fortissimo)
A basic wood based attack. A flurry of sharpened leaves strike the opponent.

Pasticcio
(Accelerando or Rallentando)
Basic sound support. A sound-based spell that converts the rhythm into a boosting effect for target spell. Can be cast into attacking spells to increase or mute the target. Can help mitigate the costs of sustained spells.

Il Ottavo Elemento
(Ultrissimo)
Ultimate Level Null spell, and the only spell belonging specifically to Null element. Fires a seven-beam shot that consists of all elements. Hits all elements except Null for increased damage