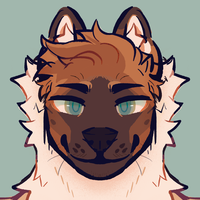 A friendly, dumb, gay jock American Akita, from Santa Cruz, California. His main hobby is surfing, and he spends a ton of time in and around the ocean and knows the best local surf spots (and loves bringing people to them.) Kai also enjoys hiking in the woods, getting high, camping, or drives to the city. Smells like sea air and ocean salt with hints of coastal pine. Is in a mathrock band called "State Park Drive" and makes music under "Beach Motel" (similar to Tycho). Can be depicted working as a Marine Biologist at the Seymour Marine Discovery Center, or at a surf shop.

His height varies along with his body type, the buffer he is, the taller he usually is depicted.  His markings are inspired by the pinto American Akita pattern, and his fur colors can vary (though doesn't hurt to colordrop his reference sheet colors if you want!). He dark eyebrows, "cheekdots" on both cheeks, a solid white curled tail, and pale pink paw pads. The fur around his neck and shoulders can be fluffy or trimmed down / smooth looking. He has sort of a "jock" look to him, with a square jaw and head shape and a wide neck.

eyes can be any shade of blue, seafoam, blue/gray, etc
chest tattoo optional, but preferred and can be stylized (generic yellow wildflowers or real)
plantigrade preferred, digitigrade is fine if drawn more toony/chibi/or without shoes

credits: (above) profile html by Hukiolukio | (below) profile html & css by Fio | hover over images for sources | NEVER for sale, please do not ask.