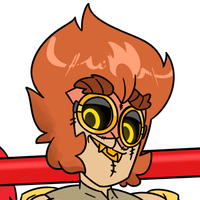 Age: A long while (Mentality of an adult)

Mannerisms: Curls his tail when excited.
Fur will bristle when startled or furious.
Scratches chin in thought

Dislikes: Being alone, being unable to fight back,

King is definitely the kind of guy you want to keep on your good side. He's loyal to those who earn it, and isn't above acting out of character for the sake of his daughter either. His aloof and sassy personality can be a touch frustrating to deal with, but it's better than him being outright furious.

Towards Strangers he's a bit more cautious, but isn't against helping those in need so long as he's aware he can handle the situation.

Towards Friends he's quite supportive. Messing with them and sometimes if they're close enough, treat them much like family. He does what he can to help them out if they need it, and offer words of encouragement. Messing with them means no mercy from him.

Towards Crushes he's definitely the openly flirtatious type. He'll spoil them with gifts and other bouts of affection, and will relish any variety of attention given to him from them.

Towards Enemies they'll find themselves shown the barest of mercy depending on who they mess with. If they've got beef with King and go for just him he'll taunt and mock them, even letting them go with just a warning if he manages to one up them. However if their enemy happens to go after any of his friends or family, they'll find no mercy in whatever hell King has waiting for them.

Description: Using the power cells within their hands, feet and teeth, they're capable of conducting a strong electric shock to those careless enough to get in the way.

Weakness: It has a very short duration, and usually leaves him pretty winded afterwards.

Description: A strong and sturdy staff capable of extending a good few feet as well as conducting an electrical current.

Occupation: Retired overseer of the oasis

Favorite Possession: A little trinket Fang made for him

Education: His prior knowledge as a scientist / survival / gardening