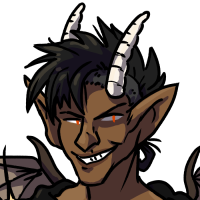 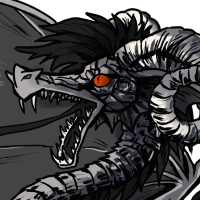 APPEARANCE: Mephisto can change into basically anything and combine features of different animals if he wants to, but his favorite forms are human, kitten, lion, and, of course, dragon. (If you're drawing him, feel free to draw him as a different species as long as he has the same general features. Not anthro, please!)

DRAGON FORM: In his natural dragon form, he is a long (around 20 meters or 65 feet from nose to tail tip), coiled, and lithe dragon of the European type. His ratio of neck and tail length to body length is like a sauropod's, but his neck and tail are more flexible and serpentine and his body is less bulky. He has a ridge of black spikes running from his forehead to the end of his tail, beginning in a "mohawk" ridge and ending in a kind of lion's brush tail or sail made of spikes. His head is long and thin and his jaw is full of needle-like fangs. He has a forked black tongue, red-orange snake eyes, and the large spiral horns of a Corsican ram. He has large bat wings and large pointed ears, which frame his jaws along with some membranes in the same darker gray color.

ANY OTHER FORM: In any other form, he generally has the same group of features, give or take whatever suits the species. He normally has gray (or pewter metallic) skin, fur, or scales, red-orange eyes, and a black mohawk (or similar black head feature), with bat wings, goat or ram's horns, a lion's tail, and he may have a ridge of spikes down his spine, but he mixes and matches according to his whims, tries out new things whenever he feels like it, and it's not necessary for each of those, exactly those, or only those, to be part of him at one time.

In every form, he always has three parallel claw mark scars winding down and around his left arm from the shoulder down to the inside of his forearm, and he can always breathe fire!