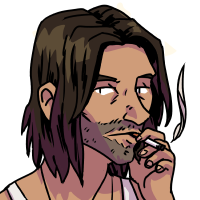 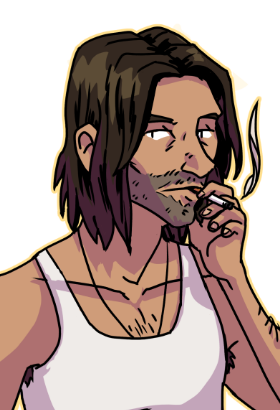 Trying to make it through the day. 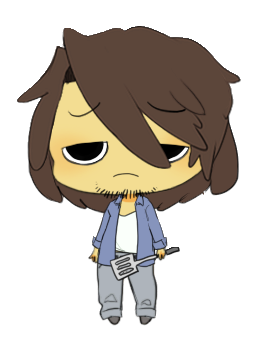 Gabriel: sad, tired, insomniac, wounded. Aspiring chef, currently working in a shitty burrito place. Smokes too much and doesn’t eat enough. Doesn’t want to talk about his problems, but he’s a Good Friend, friendly and funny in his understated way, and Trying. Friends and roommates with Dave.

He's neat and cleans when he needs peace... maybe to excess. He's an early riser and a light sleeper-- or he just gives up on sleep eventually-- industrious and restless, and tries to keep busy. He'd rather distract himself by caring for other people or keeping house than focusing on himself. He absolutely does not drink, and cursing bothers him. He speaks both Spanish and English.

Story spoilers under the cut (also warning for sadness):

Gabriel was dating Sharon, the love of his life, when she got pregnant. They were young, dumb, and poor, but they were so in love and excited to take on that adventure together. After saving up for a ring, he was planning to finally propose to her at Christmas (having already gotten permission from her mother). Gabriel was driving them to her mother's house for Christmas when a drunk driver jumped the median and crashed into their car, driving them off the road into a tree. Gabriel lost his left leg in the crash, and he broke two ribs and his left arm, but Sharon and the baby lost their lives.

Sharon's mother doesn't blame him for the accident and still loves him like a son, but he can't forgive himself, and he's not handling it well.

He feels like he's lost everything. He loses his faith in God, starts smoking, stops caring about eating or taking care of himself, and he's withdrawn almost totally within himself, except when friends like his roommate Dave can get him out of the house. He tries to put up a cheery front and keep going, but he's torn apart inside.

He has a prosthetic for his left leg, below the knee. Phantom pains bother him, and his bones still ache sometimes from the crash. He wears her engagement ring around his neck with his cross.

Gabriel wears a lot of plaid, often flannel or cotton, always too big and worn. He also wears sweaters, sometimes hoodies. He usually dresses in layers because he gets cold easily. He wears lots of blues and isn't interested in looking fashionable. He doesn't wear quality clothes: these are cheap stuff, staples. He has a m-65 military surplus field jacket for winter.

You'll never see him in shorts.

He always looks tired and in poor health, with rings under his eyes and hollow cheeks. He doesn't much bother with shaving, and his haggard appearance makes him look older than he is. His hair was shorter in better days, and it's thin and not particularly glossy. He's left-handed.

If you're drawing him, the cross and ring he wears around his neck are the most important detail.