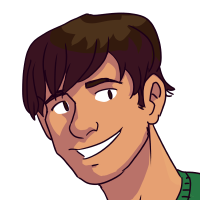 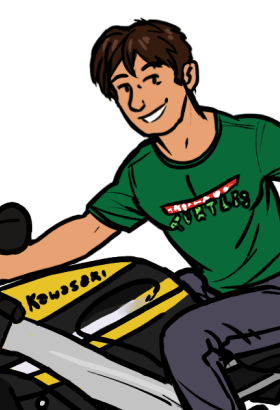 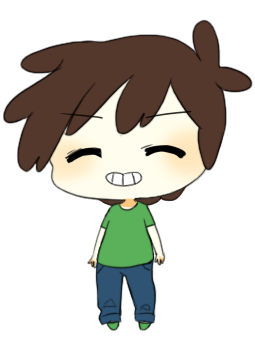 Dave is buds with Gabriel but his opposite in personality: naïve, outgoing, cheerful, foolhardy, a Bro.

He's a sweetheart, but he's like a golden retriever, good-hearted, energetic, and kind of innocent. His interests include paintball, his mom’s lasagna, fluorescent cereals, dumb action movies, and his motorcycle, a 2001 Kawasaki Ninja ZX-6R named Jinx (after the G.I. Joe character). His best friend since their school days is Craig.

He's an emotional guy who cries over sad Disney movies and can't handle sad news stories. Absolutely useless puddle of emotions when his friends are struggling with something, but he means well.

Dave works as a delivery driver, and he likes his job, but he has dreams of something better. He's just not sure what it is yet.

Dave is tall and boyishly handsome, with mischievous eyes and almost always a delighted grin. He has thick brown hair and expressive eyebrows, and cannot for the life of him grow a respectable beard.

He's typically dressed casually, in sneakers and jeans, and t-shirts that reference video games or old cartoons. He probably doesn't own a suit.