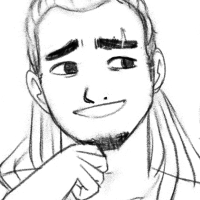 Personality:
• A big hug that became a person. He's very big, and he'll hug you.
• Mild-mannered dad and BIG-TIME Wife Guy.
• Likes to gently tease his friends but then immediately apologizes just in case it wasn't as funny as he thought.
• Always reading the room and assessing everyone's feelings, and often makes himself anxious doing so.
• Ex-soldier who didn't want to fight but didn't feel like he had a choice. Will not choose violence unless absolutely necessary.
• WILL make you take a nap if you are tired and grumpy and overworked. Do not test him. He can pick you up.

Skills & Strengths:
• Has unlocked and maxed out the entire Dad/Lesbian Skill tree: Fix Stuff. Barbecue. Pep Talk. Being Outdoors For Various Reasons.
• Can use a little bit of healing magic.

Weaknesses:
• Really wants everyone to Just Get Along, and will attempt to carry too much emotional baggage for other people in a way that becomes overbearing and self-destructive.
• Terrified of goats, for reasons he refuses to explain.

A Lil Taste Of Backstory:
Before the war, Jack Carson was living a peaceful life on a small family ranch. When the war reached his village, he stayed behind to fight while his wife and kids fled further inland, to stay with other family. After a very successful defense of his village, he tried to check in on his family, only to find that the town they were staying in had been reduced to rubble. The only corpses he found were strangers, but he's still not sure if his family is alive, let alone where they are.