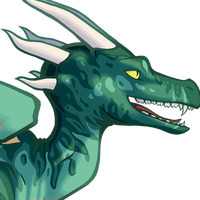 Tall and lanky, she has the least amount of mass from the rest of the team. Most of her coloring is a Jungle Green with brindled stripes of darker and lighter tones of the color, along with an Ivory belly and wing membrane color. She rarely clothes herself, even in her human form, she prefers not to.

She is rarely in a human form at all, finding it rather useless and ineffective. When she is in the human form, she has bisque skin and dirty bloned hair that she prefers to wear in braids. She often looks even more spindly in this form, along with her sharp features in her face such as high cheek bones and a narrow clef chin.

Neijah is incredibly unstable, suffering from some of the worst mental side effects of her altered genetics, making her flighty, fidgety, and quick to acts of aggression. When she's not aggressive or completely sedated she can be a little dreamy, sometimes spouting non-sequiturs when she doesn't care about her current company, (or even when she does) though she can carry a focused conversation. She can also get a little giggly and physical in these states.

She is not incapable of structured thought or reasoning, however it takes her a great deal of focus enough for problem solving that isn't related to just fighting her way through things.

She is the best healer of the group, and for this reason can take the most damage. Despite her lack of mass, her sheer force of will and absolute blindness to injury when in a full berserker state, make her one of the most dangerous in the group in terms of number clearing, capable of plowing through several platoons at once with little stopping.

Unlike the others, she has no real training for combat or weaponry, as it was too dangerous for anyone to formally train her by sparing. All her combat is almost entirely feral, with the occasional use of stabbing or bludgeoning weapons, she finds projectiles too slow and generally 'unfun'.

Much of her life is spent under heavy sedation or meditation, to keep her from attacking her peers or superiors. Due to her detachments from the rest of the world, she does not do much in the way of socializing or entertainment. Her creative outlets include mostly decorative knotwork, the repetitive task of knotting give her something both tactile and mental to focus on to prevent her from going into a dissociative episode. She also enjoys music that is constantly 'going' or noisy, finding typical calming or slow music far more distressing.

While she doesn't socialize much, she does keep mostly to Dorren or Talon if she does choose to spend social time with anyone at all. She regards Dorren as one of her closest friends, the only one she feel she can say her true experiences and sensations to. Talon she sees as a sort of adopted daughter, she acts her most stable around her, taking a great deal of focus to make absolutely sure she does not harm her nor does harm come to her in any greater amount than Talon can handle. She is at her most clear and cognitive when she is around either of the two, and shows far more of her interests and creative expression when around them, though she never has true clarity.

To help keep her feral skills, without the expense of any of their own being hurt, a few supervised 'hunts' every so often keep her entertained.

The daughter of 2 first generation soldiers, she was removed from the household and taken into military care from the time she could walk.