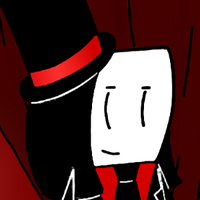 A more detailed description of Tim's childhood can be found HERE Hair color: black
Eye color: green
Type: mole
Other: N/A
|voice|
Color 1: #5100A8
Color 2: #940000
Color 3: #000000
Color 4: #CECECE
Health: Fashion before comfort, spent enough time dead to have a ghost alter ego (Silver Wraith), has an emotional scar where his happines used to be.
Clothing style: Fashion designer and cross dresser, real fancy, has a silver dress and pink lacy thong, owns a massive amount of clothes, more fabulous that any of you will ever be. Is a vampire in the sims just to get extra amount of outfits. No regrets there.

Parents: Jane
Andrej has a good relationship with both of his parents, but is closer to his dad.

BFF: Nina
Tim met Nina in elementar school, when she joined his class and took the empty seat next to him. Tho he's more interested in girly things, while Nina is more boyish, they perfectly complete each other just because of that. They soon became really good friends, and eventually also Best Friends Forever.

Lover: Cereal Killer (known exes: ex girlfriend)
Tim has been told by his mother all his life that, as a man who dressed up as woman, he is to marry a fairy, as it is tradition. He never thought much of it or questioned it much and never seemed to be much interested in relationships at all. Briefly he dated a girl, but he did so to prove a point and didn't seem to care much about her past that. He never cared much for Tadej constantly trying to get Tim to date him. He always cared a lot about Tadej, but only as a friend. That was all that happened, until that one day when Cereal Killer moved to Ä+*4~ to find Tim. Cereal Killer was absolutely in love with Tim and Tim just went along with it, for the sake of tradition his mom told him about. They officially became a couple somewhere around Episode 2-XXIII. Tim proposes to Cereal Killer in pt.34. While he surely feels some lever of emotional attachment to him, it is at the moment unsure whether Tim does or doesn't actually love Cereal Killer.
You can read a more detailed description ot Tim's love life HERE

Despite constantly being in the spotlight as a son of Jane, a famous fashin designer, being a fashion designed and a model himself and also being a member of quite popula band band Metal Sheep, Tim never liked the attention. He doesn't really like being around people and prefers the company of his close friends. He doesn't feel very comfortable around people he doesn't know well.

Elementary School: Even before starting school, Tim's mom started participating in "Little Miss [email protected]Ö#Ä3" contest. To showcase his talents in contests, his mom started sending him to dance classes, singing classes, piano classes and started teaching him about fashion. In school he was a pretty good student, while still attending various classes outsode shool.
High School: Tim starts woring with his mom. He helps her make dresses, and works as a model in her fashion shows, while still doing his best in school.
After School: Tim works full time with his mom, but later opens his own shop, Drag Queen Chicken. Soon he also joins the band Metal Sheep with Nina and Cereal Killer.