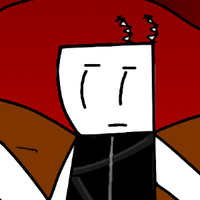 Being born to a mother who was a drug addict and growing up in [email protected]Ö#Ä3, Cereal Killer is condemmned to life of struggling with drug addiction. He tries his best to keep his addiction under control, but that's really all he can do.

Lover:Tim (known exes: N/A)
Love and marriage are taken very seriously in [email protected]Ö#Ä3. Cereal Killer's dad prepared him to chose a worthy bride when he is old enough. The kind of bride that is really a man, of course. When Cereal Killer was old enough to get married, he chose Tim to be his bride. He traveled to Ä+*4~ and move in with Tim and became his friend. He started making up excuses to pretend Tim and him are a couple until one day, they didn't pretend anymore (2-XXIII.
Cereal Killer adores Tim and would do absolutely anyhting for him.

Cereal Killer was raised in [email protected]Ö#Ä3 and so ge grew up to be weird and violent, which usually makes people fear of hate him. But that's ok, Cereal Killer prefers to be around his close friends and Tim who understand him and accept him for who he is. He really means well, but often doesn't know how to express his feelings in a normal way. He really doesn't want to kill unlless it is absolutely necessary, or if there is a good excuse for it.
Cereal Killer os very loyal to his friends, he is williong to kill for them, and he is even willing to hold back his violent impulses for them. But Glitter God have mercy on the poor souls who get on his bad side.

Cereal Killer won a Golden Bald Mermaid Award with his band Metal Sheep in 1-XXII. He also appeared in Peter's commercials for mothballs (202, 3.XXIX, and movies such as The Mothfather)

Cereal Killer First appeared as a part of the band Metal Sheep in 1-XXII. Originally he was a normal fairy but then got changed to a moth fairy cuz moth fairies are totes adorbz X3 Cereal Killer is in reality a really nice guy, but he is very impulsive, haunted by voices who tell him to do things and murdering urges. To avoid killing people, he kills cereal instead.
Cereal Killer cereal killing:
2-III, 2-VIII, 2-XI, 2-XIII, 2-LXII, 4-XV, pt.35