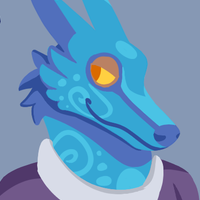 Personality
Evening is very sarcastic, short-tempered, task-oriented and doesn’t like to talk about himself much. He's mostly apathetic, going with the flow and not really caring what happens unless it interferes with his main goal; which is getting to a safe place that he will never be found. When the crew stays too long in one place, anyone gets suspicious of his true identity, urges him to stay in one place, or tries to take off his mask, he can and will get angry, defensive, and almost scared. He is willing to help Athena and Lyra document all the monsters and other happenings, and usually helps in doing so with his photography. Pictures of the sky, of nature, and fire are what interests him most. He wanted to become a photographer before he was forced into running. He acts like a father figure for Athena and lyra, and a best friend or brother with Catfish.

Growing up in a very small village in Texas, he was always interested in photography. He also had an strange fascination with fire. After a fight with his parents when he was 17 over what he wanted to do with his life, he stormed off to the outskirts of the village. Not long after, the village caught fire. The ones who survived the tragedy found Evening at the edge of the village, and knowing his reputation of a high temper and possible pyromania, accused him of burning the village down. The enraged people were ready to send him to prison for life despite his denials. Managing to get away, he changed his identity. The mask came later when the monsters started to integrate into human society. The story got passed around further and further until it twisted and told of a demented arsonist who burned his home village for fun. Now in more danger than ever, all he looks for is a safe place to call home.

Evening is a tall human with dark skin, long legs, and broad shoulders. He wears a lavender wolf mask that is frozen in a smug grin. His eyes are amber, and is the only part of his face you can see. The wolf mask is blunt-faced with a thick, furry neck, and rounded ears. The teeth of the mask are yellow and blunt. The nose and ears of the mask are dark purple and a lighter blue surrounds the nose. The mask has light markings all over to blend in with the monsters.