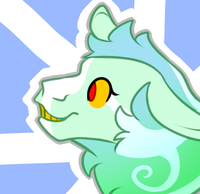 quick-witted, humorous, and always making light of any given situation, catfish just likes to make others happy and tries get them to loosen up. although he can be shown to be very nervous and emotional, especially when it comes to the other sphinxes and how he is wrong in a way. when a situation is obviously out of hand and is no longer able to be controlled, he has a hard time staying calm. he is not one to start or get into any conflict, and will run when a dangerous situation comes up. this made it difficult for him to be helpful to the group at first, but found a way to be helpful by using his heightened senses.

catfish was part of a larger group of sphinxes that traveled out of the monster realm, and he was looked down upon a lot of the time for being a runt and not useful at all. when the deceleration was called that the monsters were going to take over the world and overthrow the humans, catfish refused to help. he was convicted of treason, and became one of the most hated and most wanted sphinxes to the entire family. now in danger, he began his life on the run. it was extremely difficult for him at first, since sphinxes rely on others and get separation anxiety very easily. after they met evening in a hotel, they became fast friends, and bonded over the fact they are both wanted. they began traveling together.

Catfish is a short, catlike creature with a llama-like neck and face. He has short legs, a long body, and stiff tail with a blue fur tuft on the end. His face is light green and a cross between a cat and human, with long ears, squashed nose, wide mouth, and eyes that have golden sclera and red irises. His teeth are golden, and are blunt and straight. The fur on his body is long and mint green, that gradients into darker green on the back and tail and light blue at the base of the head. His paws are dark green and are mostly catlike, but have light claws that do not retract, like a dog's. He also has light swirls all over his body, the mark of the monster realm from which he is from.