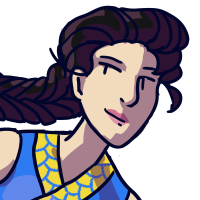 Appears in her 20s

Primary Roles in the Freak Show

I'm not going to hide their profiles, but Gracie and Buttercup are due to be revamped.

Gracie and Buttercup are, like many of my characters, beloved characters from when I was a little kid. I'll give them stage names (and better descriptions) later; these are just the names I gave them when I was little.

Gracie is Buttercup's sister, and the older of the two. Together, they work a twin act as magicians in the sideshow.

Gracie is serene, poised, and always keeps things under control. She's generally the enigmatic magician while Buttercup is her cheerful assistant.

Mystery's part of the job as a magician, but still, Gracie might be described as too mysterious. She goes off on some unknown errands without mentioning where she's going, and she tends to be reticent and reserved. She's clever and calculating, but it's hard to feel like you know her well, even if you're her friend.

She and her sister are (koi-based) mermaids-- of the Splash style; they can walk on human feet when on dry land. Gracie's stage costume, like her fins, is primarily blue with yellow accents, the reverse of her sister's.