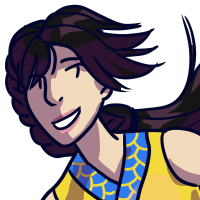 Appears in her 20s

Primary Roles in the Freak Show

I'm not going to hide their profiles, but Gracie and Buttercup are due to be revamped.

Gracie and Buttercup (no relation to the Powerpuff Girls character) are, like many of my characters, beloved characters from when I was a little kid. I'll give them stage names (and better descriptions) later; these are just the names I gave them when I was little.

Buttercup is Gracie's sister. The two of them work a twin act as magicians in the sideshow.

Buttercup is friendly, personable, and a team player. She's usually the one getting sawed in half, and she'll happily assist the other performers with their acts.

She might be too friendly and credulous, but she's a good egg. A good fish egg. She's dependable-- if her sister tends to mystery and wandering, Buttercup's the opposite. What you see is what you get with her; she's open and genuine, and if she says she'll be somewhere or do something, it's the truth. She's sweet and good with kids, and aside from her sister, among her co-workers at the freak show, she's friendliest with fellow warmhearted soul Charlie.

She and her sister are (koi-based) mermaids-- of the Splash style; they can walk on human feet when on dry land. Buttercup's stage costume, like her fins, is primarily yellow with blue accents, the reverse of her sister's.