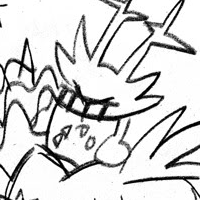 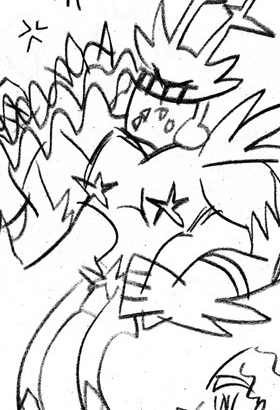 From a minicomic I made in 2011 called Happy Birthday! about a child unwrapping gifted action figures, Abomatron is the villain of the children's anime Space Train 3000, where every Saturday morning you can watch him battling intrepid hero Engineer Eddie over control of the space train!

Eddie and Abomatron are characters from the in-universe 1970s-80s style super robot anime Space Train 3000. Abomatron is the robot villain angry that the crew of plucky youths driving the space train are invading his territory-- and if he can't defeat them, well he'll just take over the railway instead.

Of course, the comic itself is about their action figures:

In the story, Eddie's action figure is unable to prevent Abomatron's action figure from wreaking havok on Birthday Kid's house-- because the dangerous villain was unwrapped first.

The full plot of the show is under the spoiler tag, as I wrote it in 2011 verbatim:

At first I was going through the pantheon of kid jobs to figure out what kind of hero and what kind of show this would be. I liked this accurately impractical goggle cowboy hat, but then I remembered that Saber Rider and the Star Sheriffs was a thing (I know about the Galaxy Railways but I was like screw it, I want to do a spacetrain anyway. plus mine has a combiner robot!)

I was listening to the Woodstock cds through most of the comic, and the result was Abomatron lasering hippies. I am not sorry in any way

The toy is based on the old Luke Skywalker-and-Wampa set (which comes with Authentic Bitchslap Action and realistic removable arm!), which is exactly as arduous to open as in the comic. Possibly more!!

HOWEVER. Birthday Kid did not get Bitchslap Wampa for his/her birthday-- instead this is SPACE BANDIT ABOMATRON and INTREPID YOUNG SPACETRAIN ENGINEER EDDIE. They are from the tv show SPACE TRAIN 3000! It is about the INTREPID YOUNG CREW of an amazing futuristic SPACETRAIN, who are journeying through the galaxy setting up this superelectromagnetic railroad to bring very distant peoples together for the first time! It is a very important and dangerous mission out in faraway sectors of space about which little is known! But they never expected the meddling of the unscrupulous ABOMATRON, a horrible giant robot beast who is not happy about invaders in the sector of space that he rules over with iron interchangeable fists! At first he tries to repel the YOUTHS but later he realizes he has more to gain if he TAKES CONTROL OF THE RAILROAD instead of preventing its construction, so he can gouge MUCH GREATER numbers of foolish spacepeople on OVERPRICED FARES and LUGGAGE FEES and also TAKE OVER THE ENTIRE UNIVERSE with the MOBILITY and GREAT NUMBERS OF NEW SUBJECTS a train in space provides. Luckily the crew (the Engineer, the Conductor, the Brakeman, the Stoker, and the Plucky She-Investor) can transform the five cars of the interspace railroad into AMAZING, though completely UNTESTED ROBOTS that they can pilot, and combine together to form a GIANT ROBOT to battle ABOMATRON, but the battles are many and the war has no end in sight. Will they ever complete the space railroad???

It is somewhere in between Zorro serials from the '30s and super robot anime from the '70s, but for a while I was very attached to making this about acid (Abomatron would shoot Bad Trip rays; the Youths would fight back with Sweet Jams), so I do in fact have better judgment!

It does include all the important aspects of '70s super robot anime, though!! DISQUIETING ROBOT NIPPLES (I opted for robot pasties over Madonna cones; both are valid choices)! GO-GO BOOTS for everyone! some kind of SAMURAI ANTLER ROBOT HAT! the leader of the INTREPID YOUTHS wears RED and has a MULLET (that is how you can tell he is the leader)!!!