Blythe Fowler loves love, and wants to do everything within her power to bring that feeling to the people around her. Thankfully, she's been practicing divination to do just that. Using magic, Blythe helps clients at her matchmaking service find true love, or at the very last a good date. Life keeps throwing challenges at her, the latest being a new dating app stealing her business away, but she refuses to give up on her dream.

Blythe is a human witch, usually a human who's taken up witchcraft, as many species choose to. Although Blythe's bloodline is full of magic users, enough humans have been mixed in that she lacks the inherent magic a pure witch does, and has to work harder to make her magic effective. Unfortunately, she's not the brighest when it comes to book smarts. To prove to herself she deserves to be a witch, she practices day in and day out, putting most of her energy into her area of focus, divination. She dreams of running a matchmaking service in her hometown Myrefall, utilizing divination magic to help find people's perfect match.

When she finally has the chance to open the shop she's been dreaming of since she was a young girl, a new dating app swoops in and steals all her customers. Suprisingly well versed in a demon's touch, she notices that there's more than a couple things off with this app and the effect it's having on her town. Clearly the only solution is set off on an adventure and stop it at the source, or at least that's what she thinks. Demon girlfriend in tow, Blythe has a new mission at hand, feuled by love for her friends, and a burning passion to get her business off the ground. 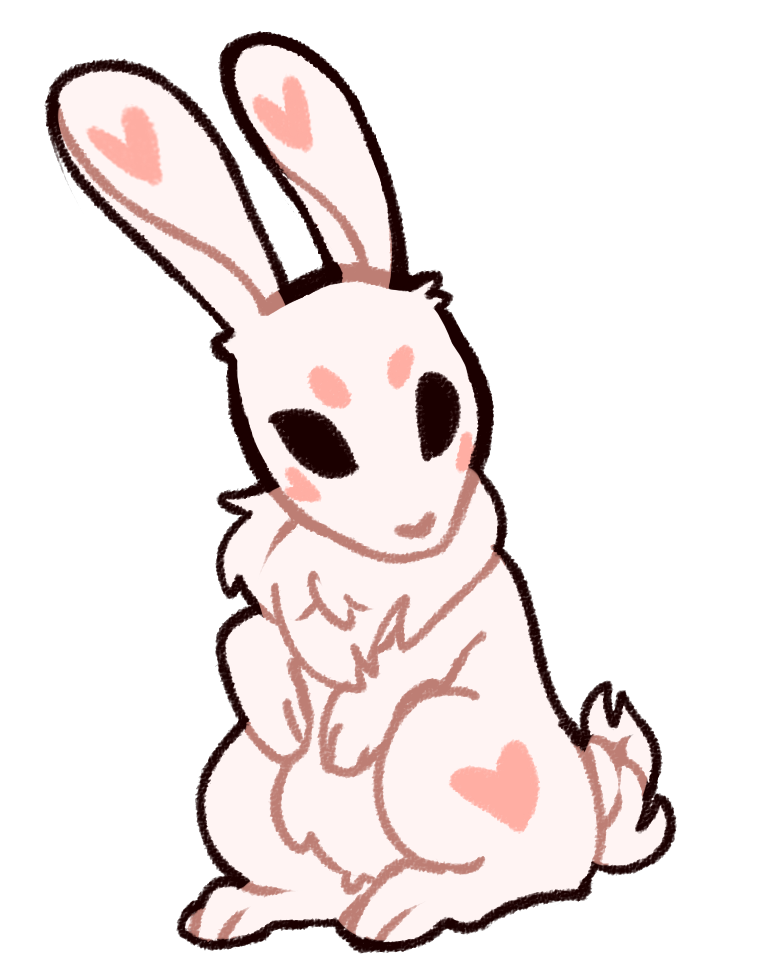 Henry is Blythe's familiar, a grumpy white rabbit brandished with pink hearts. Henry's personality strongly contrasts his appearance. The white fluffy bundle of joy is actually quite a grump, and acts as a realist against Blythe's naivety. Even though he may seem to be a bit of an asshole, he still cares deeply about Blythe. They share a special connection, the same that every witch has with their familiar. As much as he may gripe and criticze, there's always love beneath his words.

Blythe was a bit of a late bloomer, most witches find their familiars before age five, but here she was at six still lacking her forever friend. She would often explore the forest on the outskirts of Myrefall, searching for a familiar, but no matter how hard she tried she couldn't force a connection. Defeated and tired from a day's work, she finds herself crying in an open clearing. She has so much love to give and no one to give it to. Curiosity piqued, a little white rabbit hops over and nuzzles into her side. He looks angry, but still determined to wiggle his way into her lap. Blythe feels something spark in her heart, an instant realization. This bunny is her familiar.

One fateful evening she mixes up words in a ritual, maybe those were the wrong candles too. What should have predicted something in the immediate future, instead summoned a demon into her humble home. No sooner than this demon appeared, the marks on it's skin faded in on Blythe's own. The two were tethered. She, the demon, was very tall and very beautiful. The extensive markings on her body showed that she was of great power as well. Blythe, having no good reason for a demon, wasn't sure what to do next. She couldn't be sent back until her purpose was filled, but she had no purpose in the first place.

Stuck in this conundrum, Blythe decides to do the unthinkable from the goodness of her heart, and tries to acclimate the demon to her town. Maybe it's just pure good will, or maybe something about Blythe is just extra charming, but she wins the demons good favor and then some. In a strange turn of events they are happily in love, living domesticaly. Blaire isn't the most conventional girlfriend and her social skills are near non existent, but they seem to be content with their lives.