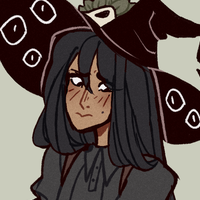 Mara keeps to herself and spends most of her time tending to the Cemetery or hiding out in the library. Her aptitude in necromancy makes her the strongest witch in Myrefall.

Mara is a Necromancer, a rather strong, but also feared, type of magic. Often those who study it are ostracized and treated as depraved to some degree. Mara keeps to herself and does no harm, but knowing the reputation she must have eats at her self-esteem daily.

She's always been a strange girl. Slow to make friends, overly invested in death, and just,, a little off. Growing up she noticed how different she was from the other girls (and boys too) and took that as a reason to stay quiet. As an adult she's able to embrace her quirks and differences more and put herself a little more out there. Her meek nature still stands at the core of her personality though, making it difficult to make new friends.

When Blythe notices the mark of something sinister lurking in her new competition, she turns to Mara for her extensive knowledge in the darker side of magic to help pinpoint exactly what is afoot. She's able to play a critical role in solving the mystery of the rival dating app, and in the process, comes out of her shell more as the adventure takes them across Evralon.

Keke is Mara's familiar, a shiny black raven. Keke is a rather mild mannered familiar, as reserved as her witch. She makes for good company as Mara tends to the cemetary on her lonesome. Keke also acts as somewhat of a forewarning whenever someone is about to arrive, which aids Mara's tendency to jump when approached out of the blue.

Pandora is Mara's little sister, and almost the exact opposite to her as well. While Mara prefers to keep to herself, and her interests lie in the death and decay, Pandora is a ray of sunshine and well known and loved by the residents of Myrefall. Despite their differences, the two are very close and have a bond unrivaled by anything. It was Mara's friendship with Blythe's older sister Etoile that led Pandora and Blythe to become so close as well, as the families were well aquainted by then.

Mara makes a point to visit her sister's bakery during her lunch break at the cemetery, though she fears she scares off the customers. Pandora insists that isn't the case, and always welcomes her sister with open arms and a warm meal. In fact, frequent patrons of Pandora's Bakery are some of the people in Myrefall that have come to find Mara is quite literally one of the most harmless people in town.