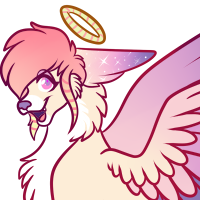 Appearance: Her fur is mainly cream with markings that fade from pink into purple with stars dotted all along these markings. Her wings and the markings on her feet, also fade from cream to pink into purple, but lack the stars that her tail and ear markings have. She has a white muzzle, white toes and a white underbelly that goes along the underside of her tail, down to the tip of it. She has bright pastel pink and purple eyes, a dark (not very dark though) purple nose, white teeth, a pink tongue, pink claws and purple pawpads.  Her hair is peachy pink and fades into yellow, the yellow part of her hair has some dark (not too dark) pink stripes going across it. She also has pastel rainbow fingerless gloves (or toeless socks, depends on your point of view.) and a lighter yellow and lighter pink striped halo.

Personality: Aria is an overall sweetheart! She adores helping others, sharing her sweets with her friends and giving presents to others! (especially to her friends) Friendly, outgoing, empathic, helpful, protective, loyal and honest! She is rarely seen not assisting another creature or doing something fun! She treasures her friends and would do anything to help them out! Mostly she is a happy and cheerful being, however on occasion; she can be quite sad and depressed. This is due to her having Bipolar disorder.

Mental Disorders: She has ADHD, Dyslexia, Bipolar disorder. (Somedays she has more depressed/sad moods over the manic/happy moods but not always.) and CDO (OCD with the letters in alphabetical order as they should be)

Extras/Others: Reserved for anything else information wise that I come up with.