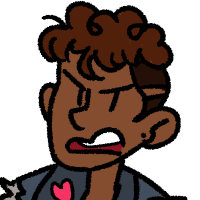 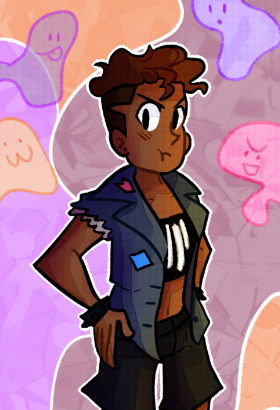 Imani is the main character of an old comic idea that I'd love to revisit someday when I have the time.

The comic is unofficially called "Cursed Punx" and is the story of some teens who mess around in an abandoned house and accidentally summon the spirits with their graffiti tag-- but the spirits refuse to go back where they came from, because it's nicer in the physical realm, so they decide to follow Imani around instead. And they're the worst spirits, the absolute dumbest possession, 0/10 would not summon again-- but nevertheless, Imani is stuck with them, so they get to go on Teen Adventures™.

Imani is a 15 year old punk (nb, they/them pronouns) who's way too cool to be babysitting ghosts, and really wishes this was anything like the respectably spooky possessions in horror movies.

(Anyone who's known me for a while will know why I'm so into Dumb Possessions... l m a o)