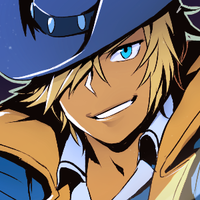 Adventure, money, hats, the color blue, driving, messing around with innocent people who have no idea what they're getting into, s'mores, trail mix, animals, guns, adrenaline rushes, drive-in theaters, being outside, camping, the sounds of cicadas and crickets, clear weather, running, casual mind-altering substances (like alcohol or marijuana), appetizers, guitars, pancakes, veggie burgers.

Law enforcement (though, if they weren't around he figures his life wouldn't be much fun), being cooped up and having to just sit around, waiting, the Internet, the cold, snow, when machines break down, when people cry, meat (he's a vegetarian), lazy people, when people walk too slowly and he's stuck behind them, music that's played too loudly, traffic, when people talk for too long, staying in one place for too long.

Azior lives, first and foremost, for himself. He's concerned only about his own personal enjoyment of life and has little problem inconveniencing or harming others in order to get what he wants. Because of this, he's no friend of the law and spends his days robbing, kidnapping, and sometimes even killing. He doesn't lose a second of sleep over this, and just about the only thing that'll make him feel guilty is making little kids cry. He has a soft spot for children and struggling families and will leave them be, every once in a while going so far as to help them out.

Azior is cocky, confident, and hard to shake. People tend to underestimate him because of his attitude, but he's actually exceedingly intelligent and crafty; he wouldn't be nearly as good at what he does if he wasn't. He can stay calm under incredible amounts of pressure and seems entirely immune to worrying. Even when he gets caught, he takes it easy and goes with the flow until the opportunity to escape arises. Injuries are minor setbacks and the deaths of others are unfortunate, but inevitable. The way he sees things, whatever happens is what was meant to be. He doesn't let himself get hung up on things; if he does, he's missing out on too much.

Azior was born to a decent-sized family and grew up without struggle. He and his family were never particularly well-off, but things never got bad enough for Azior to notice. He got great grades throughout school, and his family had high hopes for him to grow up and become both successful and wealthy. Azior felt the same way, though the way he intended to gain fame and fortune wasn't exactly what his parents had in mind. Instead of going on to college, Azior took to the road and headed straight for the crime-riddled desert.

See, Azior had two great loves: money and troublemaking. However smart or talented he was, school was agonizing and the idea of a respectable career did little for him even when that path promised more money than he could ever need. He needed danger, thrill, and the ability to look at the future and have no idea what was ahead. He wanted his heart to be pumping 24/7, even if that meant that it could explode at any moment.

Azior fit in like a glove. His intelligence and reflexes made him perfect for pulling off heists, and pretty soon he was stealing just for the fun of stealing, not because he wanted or needed anything. He joined and left gangs with the ease of a leaf on the wind, effortlessly evading both capture and death and gaining notoriety wherever he went. Eventually he became particularly skilled at kidnapping, stealing the belongings of wayward travelers and then holding them for ransom.

On an ordinary day he did the same song and dance with a young man named Vitrail Alkester and his fairy companion. Unfortunately, they didn't have much to steal and the only person they would be worth anything to didn't have much in the way of money, either. The fairy and that big sword Vitrail was carrying could be worth selling, but before Azior had much time to ponder it Vitrail explained that he was the Chosen One and that he - as well as the fairy, Carisel - were on a journey to save the world from the great evil that awakened every 1,000 years. The sword was the only thing that could slay the great evil in question, and Vitrail was the only one who could wield it.

Azior wasn't exactly buying it, so Vitrail asked that Azior join the two on their journey instead. He could have whatever money or valuables they got, and there would be plenty of adventure on the way. That was more up his alley so Azior decided hey, why not? He agreed to join Vitrail and Carisel's party, much to the former's glee and the latter's displeasure. With that, the three were off to save the world! Probably!

TBA, will update once I decide what kind of stat format I'm using! Or if I'm going to make multiple different versions?!?!

Azior has the stats of a typical gunner class: he's fast, accurate, evasive, and has a high critical rate. However, his defenses are pretty awful and he needs a meat shield to stand behind to have a shot at surviving. Seeing that he can attack from a comfortable distance, of course, he has no reason to be on the front line anyway.

TBA for the same reasons as above!

Azior's skills focus on dealing either high damage to one enemy or doing low damage to all enemies. He can stun foes, paralyze, or blind them by aiming for certain body parts, and increase the critical rate and evasion of his teammates.