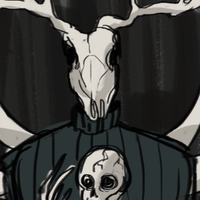 As if he remembers!

Vaguely male. It doesn't matter to him, really. Undead skeletal constructs have little need for concepts like gender. (he/him)

Professor of Necromancy at Hell College

Spilling tea on himself because he's a skeleton, noisy people, pretty much anything modern (everything was better back in his day), guns, puns, people who can't be reasoned with, anything neon, parties, sloppy handwriting, disrespect toward public property, being rushed, losing his glasses and pens even though he only put them down for like two seconds.

Studying and performing necromancy, reading the newspaper, silently judging others, yelling at kids to get off of his lawn.

Every damn Christmas he wakes up with a red bulb glued to his face. When he finds out who's behind it, he's going to grind their bones into a fine dust and use them to flavor his tea.

Yenzhal is proud of his demonic nature and wants everyone else to know it. Despite his bony, spindly form he has a large presence and a booming voice that commands attention effortlessly. His speech is professional and elegant but to the point; he hates beating around the bush. He's polite, but just polite enough to be considered classy and refined; like any demon, he's still quite fond of murder and soul-eating and won't allow anyone to change that.

The plights of mortals and his fellow demons mean little to Yenzhal. For the most part, he cares only for himself. He's always right and is who everyone else should look toward as an example; those who diverge from his schools of thought are inherently wrong and should be looked down upon without pity. It's difficult to get him to change his mind about anything or convince him that his reasoning his flawed. Once he's made a decision, it's final. Once he's formed an opinion, he'll die with it. To those who he sees as on the same level as him and to those he sees potential in, he's calm and a good conversationalist. Even if he's unlikely to change his mind, to those he deems worthy he'll engage in debate.

Yenzhal doesn't take disrespect lightly and is endlessly repulsed by Hell College's casual, lighthearted student body. He's an unpopular professor, showing no mercy toward his students and little care for them as people. He loves to study, partake in, and teach the art of necromancy, but at the same time he feels the latest generation of demons can't appreciate it. He has an intrinsic hatred for those younger than him, convinced that younger demons are spineless cowards who seek alternative methods of survival other than the consumption of flesh and souls to thrive. They've been too influenced by mortals, and he sees himself as the only one who is capable of whipping them back into shape.

Yenzhal spends much of his time alone, reading and studying. He sometimes ventures outside of Hell College to collect corpses and make contracts. He lacks the charisma of most demons, but he has a knack for finding desperate beings who feel they have no other choice than to contract with him to keep on living.

"A true demon is self-sufficient. Those who rely on emotional bonds and power that is given instead of taken... they have no right to call themselves demons."

From birth, Yenzhal was an accomplished necromancer. Despite being a raised in a poor, insignificant family, Yenzhal's magical talent allowed him to make a name for himself as a child prodigy early on in life. He brought wealth and fame to his family name, and though this put plenty of pressure on Yenzhal he thrived on it. By the time he reached adulthood, he was considered one of the most powerful necromancers in existence and had the most populated cult in the world.

While this attention allowed Yenzhal's influence to spread and gave him many opportunities to let his power grow, it also attracted enemies. Ordinarily they were of little threat; if anyone could get through his cult, no one could stand up to his power. However, one day a rivaling cult managed to catch him off guard and overwhelm him, dismembering him and mixing his remains with the bones of animals and monsters. They intended to reanimate him to show off their power and prove they were the greatest necromancers of them all, but the moment they did Yenzhal regained control over himself. In that split second between reanimation and enslavement Yenzhal lashed out against the cult, killing them and reanimating their corpses to kill off whatever stragglers remained. His memory was impaired, but the instinct to continue his art remained. He improved his form by collecting more bones and feasting on souls to power him, creating an army of the undead that expanded until he had conquered the world.

Not long after he received an invitation to Hell College: as he had succeeded in turning his planet into a Hell on Earth, he was eligible to enter. He accepted and passed all of his classes with flying colors, becoming even more accomplished at necromancy. He stayed around for graduate programs, and eventually he got a job as a professor. He's remained at Hell College since, teaching necromancy and hoping to influence his students to be strong and unstoppable demons.

Yenzhal is a necromancer: he has the ability to reanimate and control the dead. Due to his immense power, he has more precise control over those he reanimates than most necromancers and his undead minions are more intelligent than normal. The more recently deceased the being was, the stronger and more durable it is. Likewise, beings that are killed by Yenzhal himself are more powerful than a random corpse in the ground he picked up. He has command of ghosts and spirits as well, often creating them himself to serve him out of the souls of those who have contracted with him.

As mentioned, like most demonic entities Yenzhal is capable of forming contracts with other beings in exchange for something. Yenzhal accepts nothing short of the contract-seeker's soul, and upon their demise he'll either consume the soul or add it to his army. His contracts are known for being difficult to get out of, and while it's possible doing so often prompts him to kill the contractor himself and take their soul that way. Every once in a while, though, he'll be impressed enough to leave them be, tempting them to become a demon themselves.

Yenzhal has studied other magical arts, particularly dark magics. Of note is his ability to manipulate bones, usually used on himself to serve as armor and/or weaponry.