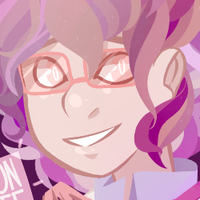 Zhirael. Also totally has crushes on like all of his internet friends

Zhirael, aesthetic blogs, being wrapped up in whatever, things that are small and fuzzy, warm foods, brownies, really comfortable couches, leaving the window open when it's cold out and then wearing like 50 layers (half of them blankets), pictures of the sky (especially at sunrise or sunset), vaporwave, cool rocks, using a very unnecessary amount of shampoo and then just lathering for 20 minutes, dark rooms, colored lights, soft candies, sleeping, people, sleeping with people, heated blankets, paper cups, personality quizzes.

Large birds, really hot days, forced memes, loud noises, zoos, camping, 4chan, hard candy (unless he's just, like, looking at it), really bright rooms, history classes, not having enough money for things, full pants, hair straighteners, sand, facial hair, people who don't recycle, finding out your toast is burnt after waiting all of that time for it, small enclosed spaces (he's severely claustrophobic), getting out of bed, being without Zhirael for a long time.

content warnings: car accidents... a lot of them. bonnie is not good at driving.

Bonnie is sociable, loud, cocky, and a filthy memer. He loves to have a good time and has a lot of confidence in himself, speaking his mind without hesitation. He never seems to show much doubt in himself, and if he does it's more on a logical front than a moral or emotional one. Though he has a pretty intense sarcastic streak and doesn't seem to take anything seriously, he knows how to tone himself down and will always try to be there for people when they need him. If you can get past all of the puns and loving snark, he's a very good friend.

Deep down, this is sort of a front to cover up all of his internal anxieties and problems. He's self-conscious and paranoid for a lot of different reasons, but he doesn't want to acknowledge it or talk about it ever, so acts like he thinks he's the greatest thing that's ever happened to the universe when in reality he kinda sorta hates himself a little.

When it comes to affection, Bonnie is somewhat hard to predict. He tends to be flirtatious toward his friends, and in Zhirael's case he's very forward with his affection and tends to drop innuendo just to get a reaction out of him (and/or whoever else is around). As soon as Zhirael (or anyone else) says or does in return, however, he usually just ends up yelling "fight me!!" or "wtf that's gay..." and blushes furiously. If the former he'll engage in fierce, vaguely-sexually-charged banter until he reaches the point of the latter, where he just kind of melts and wants to snuggle for the rest of eternity.

"I mean, if you think about it, you should really be thanking me. It was more of, like, a car miracle than a car accident."

Bonnie is something of an enigma. Despite his young age, no one's sure where he came from or what he's doing in [wow i should name Asthenopia locations someday huh] aside from going to school. He has remarkable technological prowess, having access to highly illegal inter-Reality internet while eluding the suspicions of Heaven. He doesn't seem to have any family and despite his extroverted personality, before meeting Zhirael he didn't seem to have any offline friends.

One day while browsing Craigslist some website, he found an job ad by Demon Lord Zhirael - a demon infamous for residing on the mortal plane and accepting eyes in lieu of souls - asking for assistance in technological affairs. Interaction with demons is considered highly taboo and bound to get one's soul condemned to Hell even if the demon in question doesn't claim it, but against his better judgment Bonnie decided to respond anyway. To his surprise, Zhirael wasn't particularly threatening, and the offer was too luxurious to turn down. Free housing that was miles better than his dorm, ridiculous pay, no soul stuff involved... definitely worth potential damnation.

What Zhirael wanted was kind of cute, Bonnie thought; he wanted to know how to use the internet, like some kind of little old lady or something. He was researching human culture, seeking ways to reach out to humans and encourage them to revolt against Heaven and Hell alike and take charge of their own destinies. Bonnie thought that was kind of cute, but more in the hot way than the little old lady way.

Though admittedly he was kind of nervous about helping incite revolution against beings far above him, he was intrigued and shared most of Zhirael's ideals. More importantly, Bonnie found himself becoming increasingly more interested in Zhirael himself. Everything about him was alluring and unexpectedly safe. He was easy to talk to, easy to trust, and hard to go without for long. Much to Bonnie's excitement, Zhirael seemed to reciprocate his feelings and it didn't take very long for them to enter a romantic relationship.

A few months later, Bonnie managed to hit some kid in the street with his car. Said kid turned out to be someone named Eo, an amnesiac necromancer who had been keeping themself alive with their own magic even before their unfortunate meeting with Bonnie. They gave Zhirael one of their eyes in exchange for a steady flow of magic so they would have the time to figure out who they were, and Zhirael allowed them to move in with he and Bonnie. Shortly afterward Bonnie got into an accident, this time hitting the car of a very distraught detective Tigel Smith and his dead girlfriend, Seems Wright. Instead of pressing charges Tigel followed Bonnie back home and gave his soul to Zhirael in exchange for Seems being revived. Thanks to Bonnie's incredibly irresponsible driving, Zhirael and Bonnie find out about a certain abandoned hospital on the edge of town that might just hold the information they need to convince humanity that the Higher Angels aren't all they're cracked up to be...

Then a bunch of spoilery things happen, but throughout it all Bonnie somehow still keeps his license and that's probably the biggest plot twist of all imho