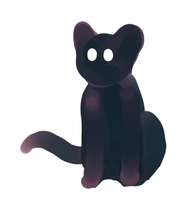 Uzi is the physical manifestation of Yukira's guilt after she had the Beetle Salesman (a Fae? of the smear) rip them out of her in payment for a quest to redeem herself. Guilt, like many emotions, has a habit of returning, and before long Yukira and Uzi were eventually reunited, to both of their relief. While guilt is a lot to live with, comfort can be found in it, and now Yukira has vowed to protect, even agreeing to a transformation proposal from her Dragon god in order to preven Uzi from disappearing.

Uzi themself is so much more than guilt at this point- something about being seperated and being around the magic of Beetle resulted in a creature who is nervous, but often curious, anxious to help but sometimes frozen in fear when they cannot do anything. Their initial form resembled some vaguely beetle-like form at first, an orb of darkness inset with glowing white eyes and six spiderly legs. Interactions with others have led towards Uzi learning how to shapeshift much more, and now often takes the form of a shadowed-cat, though when nervous their form shifts and moves in agitation. While Uzi is a separate entity, both he and Yukira share a strong connection, and both share the guilt either may be feeling based on their actions. When upset, Uzi becomes more dense, guilt literally weighing them down. Uzi also feels greatly for others, but as they are very young are not entirely sure what to do for the most part. While they don't need it, as always guilt consumes, and Uzi has developed a particularly palate for marshmallows in particular.

Uzi is often very catlike in temperment, though a very clingy cat. They wish to help how they can, though that is often less than they feel they can do and can be overwhelmed by their own inability to help. They seek comfort not just from Yukira but from others, like a nervous cat who always needs to be pet during a thunderstorm.

Still, even if they can be a bit nervous and clingy, Uzi also gives comfort when they can, not just to Yukira but to others. They are curious, and have figured out to an extent the meaning of many emojis on Yukira's phone and how to send them out, a skill that is largely due to their connection with Yuki. They can be a bit proud, strutting when they think of an idea or find a prize they believe to now be their own. Overall though, Uzi is the most empathetic cat-like creature you might meet, albeit they may not always have the standard four legs. Where Uzi was born from, they came initially from Yukira's heart, weight down by the guilt of all her failures within the smear and within her life, from her failures to her kingdom to (unintentially) killing her love. Now reunited, neither wish to be separated from the other, and it does cause stress and pain to do so for too long. Yukira, for her part, as with many she cares about, wishes to protect Uzi at all cost.
Beetle

Beetle kept Uzi locked away when Uzi so wanted to return to Yukira, even though she was the one who agreed to have them removed in payment. While not mistreated persay, Uzi views Beetle as a guard he had to escape, and as such is afraid of meeting again should they be bottled away and added back into the collection. Should Uzi encounter Beetle again, they will only react in fear and hide as best they can. (Image by Parda)

Static was the first non-beetle person Uzi met when trying to find Yukira, and as such quickly befriended and sought comfort with him, even going so far as to copy his form as best Uzi could at the time. They are good vent buddies, and Uzi will gladly share a mallow or two with Static. (Image/character by Mafic)
Static

Uzi is curious about Turing and upset that they don't feel that they were able to help them during the battle and storm. Uzi is, however, not very good with boundaries and doesn't quite understand that trying to crawl inside of Turing's gears may not be appreciated. (Image/charcter by Shazzbaa)
Turing