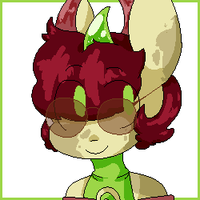 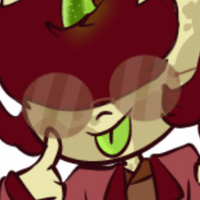 As the integral spiral structure, Vodovorot is the living embodiment of spirals, swirls, and all related imagery, memetics, and concepts. Swirls exist because Vodo exists, and he is an overpowered reality warper due to this.

Born from one half of Bereave after he died in Keep A Secret, Vodo is host to Bereave's mind, with the two sharing a consciousness. Though Bereave tends to veer in the territory of constant intrusive, negative thoughts, Vodo firmly ignores them, understanding them to be false and instead choosing to spread positivity and kindness instead.

His genuine love and affection for everything can seem faked or overblown at times, but Vodo truly is full of happiness at existing and all of existence. He isn't naive - merely idealistic and trusting, willing to give people second, third, fifth, twentieth chances, encouraging them to grow better along the way. He has little tolerance for cruelty and atrocities, and will quickly step in to fix them if he sees them.

Though he loves all the Mags (and vice versa), he tends to hang around Farley the most, as he considers Farley both his first real connection and his best friend/partner. His other friends include Juice and Devy.

Upbeat, but not overly energetic. Always has something positive to say. Constantly picking out the silver linings and full of nearly-infectious optimism. Perceptive enough to tune it down when it's unwanted or inappropriate.

Observant; comes off as such. Completely concerned and absorbed with other people's feelings, goes out of his way to temper them. Encourages happiness, self-satisfaction, self-love, confidence, and idealism, but shuns arrogance and selfishness.

Awed and full of wonder at the world. Sees how beautiful it could be, and eagerly works towards achieving that. Actively works against even small atrocities. Highly individualistic, focuses on improving lives one by one. Not too unaware to be naive. Comes off as naive anyways.

Extremely difficult to agitate or anger; tends to make excuses for behavior instead. If successful, withdraws into self and becomes quiet, or leaves. Temper? Who's she?

Undeterred, even if manipulation isn't working at first glance. Always willing to play the long game. Planning in the back of his head, but never selfishly. Wants you to be the best person you can be. Is usually right. Let him help guide you.

Spoilers for Keep A Secret are present in this section.

placeholder, primarily, but here's the lowdown:

Hello, friends! My dearest comrade Kvadrat has shown me this most wonderful 'social media'!

Farley     (partner)
Farley is Vodo's closest friend, confidante, and partner. He prefers Farley's companionship to most other peoples', as Farley's nice, lowkey, and a good listener. They're the eldest of the second generation, too, so they also like to make jokes about being old farts.

Linija     (best friend)
Linija is the unofficial (official?) leader of the "Line Crew", which Vodo was indoctrinated into. He's fine with that, as he ultimately greatly respects Linija's word and opinions, even if he disagrees with large swaths of it. Plus, he takes Vodo with him on work trips. Which is fun.

Bereave     (hm)
The voice inside his head telling him he's awful. Though they got off to a rocky start, Vodo's compassion extends to even him, and he's in the midst of trying to help Bereave reinvent himself and see the world in a new light. Maybe somewhat forcibly. Hey, you do what you have to.

Juice     (close friend)
Juice is confident, which is a trait Vodo admires and likes to see in others. Perceptive enough to pick up on Juice's persona, their dynamic has had room to flourish and has evolved to encompass a role of mutual advisor. Vodo's a little too grounded to do feral stuff.

Zmeya     (complex feels)
Zmeya, like Vodo, also has someone in his head - Genesis. However, he's coping with it much more poorly, to the extent of taking out some of his frustrations on Vodo. Though he can't blame Zmeya for it, it does leave Vodo with mixed internal feelings. Still, he helps how he can.

Rendgen     (friend)
Another member of the line crew, and also the primary reason Vodo exists. Though Vodo is grateful, he doesn't really think it's important enough to elevate Ren above normal friend levels. Ren, however, thinks Vodo is FANTASTIC, LOOK AT VODO.

Proximity     (friend)
Prox doesn't seem to like Vodo very much, and he can't quite place why. Bereave, at least, is very vocal about the faults he finds with Vodo - but Prox just finds a polite excuse to leave. While that doesn't deter Vodo from trying to befriend him, it does befuddle him.

Quantum     (friend)
Vodo knows Quantum thinks he's stupid, but that's fine. Everyone is entitled to think of him as they will, and since Quantum isn't cruel enough to bully him for it, it's all good. He's been on-off trying to help Quantum move past his trauma and forgive Juice, but it's very slow goings.

Devetougao     (friend)
Devy is more high-energy than him, though Vodo tries to match it the best he can. The cruel jokes Devy plays are a bit too much for Vodo's tastes, and he does tend to manufacture some distance. Vodo is very thankful Devy wasn't saddled with Bereave, however.

Peresekat     (friend)
Pere very much loves Vodo, and is highly vocal about expressing it. Vodo in turn showers the other in affection and compliments, though he's quietly planning to turn around Pere's idea of world-redemption-through-conforming-existence-to-one-good-Timeline.

Jedanaestougao     (friend)
Vodo respects Jedana for what he does and his position to Zmeya, but they're usually so busy wrangling others they don't see each other often. When they are together, they have little to talk about other than other people, so conversations tend to peeter out. Still, he's a nice man.

Trinaestougao     (friend)
Trina's behavior is a point of worry for Vodo. He's confident it's stemmed from both her youth and apparent lack of identity among the Mags, and has been applying techniques learned from Zehneck to try to encourage her to grow without the influence of others.

Ellipsa     (friend)
Ellipsa is normal. Normal enough that Vodo struggles to find anything wrong with him that isn't just nitpicks or personal opinion. Which means they can have an actual normal friendship instead of Vodo trying to psychoanalyze him to give covert therapy. Yay, friendship!

Zvezda     (friend)
Though Zvezda is considered to be a concerning pile of mistakes by the older Mags, Vodo doesn't see much wrong with him. Zvezda is much happier not knowing about the world, and though he doesn't approve of the Mags consciously enforcing that, he doesn't try to change it.

Kvadrat     (friend)
Kva is kind, but has a masochistic streak a mile long. And either doesn't realize he has it, or is an expert at avoiding talking about it. Vodo knows handling that one will take quite more finesse and subject-dancing than he usually employs. He's confident in his abilities, though.

Strela     (friend)
Strela has a crush on Vodo, as he does most Mags. Vodo is kind to him - though he doesn't have romantic interest (and has clarified that), he's still affectionate and complimentary. No reason not to be, really. He'd like to help Strela with his self-esteem, too, but there's bigger fish at the moment.

Srce     (friend)
Though he showers Vodo in affection, admiration, and love, Srce has a lot of self-worth problems that Vodo is trying to deal with. The random bouts of overprotectiveness are worrying, yes, but there's no reason to absolutely berate oneself over it, come now!

Dijamant     (friend)
Dij. Dij's persona is strong, though there's enough cracks in it that Vodo knows there's something off about the other. But he's so condescending about it that it's hard to get him to take anything seriously. Still, Kolo at least seems to help him? What a perplexing bastard.

Why would you fight Vodo? You monster.

Covered in sentimental junk that's all actually gifts from other people. Will find a place in his house for anything given to him, so everything's more tidy than it seems like it'd be.

Likes putting on music for visitors; has a vinyl player. House is otherwise full of ambient bird chirps.

Loved and adored amongst the Mags for his compliments, cheeriness, and kindness. That's our baby, Vodo! Opinion is respected and taken very seriously.

Unknown outside of them.

Knows he can be manipulative, but knows he isn't self-centered, so is unconcerned. Has a healthy amount of pride in himself and his people. Genuinely means his compliments. Thinks of himself as insightful. Enjoys being around others.