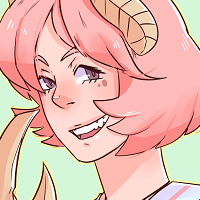 Winter, the cold, gloomy weather, when the birds don't chirp in the morning, dry bread, being too full to move, when her tail gets caught on things, writing, school, adults (even though she is one), anyone who messes with Hiema.

Aesie is... not very mature for her age. She's rambunctious, loud, and acts like she's still a kid. She tends to be kind of entitled, greedy, selfish, and more than willing to fight someone to get what she wants. Heck, she'll fight someone for any given reason, honestly. Y'know what? She doesn't even need a reason! She loves fighting. She's all about brute force.

Aesie is mischievous and likes to pull pranks on people (read as: scaring someone and then eating their soul), even people who are way more powerful and/or more intelligent than her. If anything, she likes the challenge! She isn't very smart, however, so her traps and tricks tend to be obvious and easy to defend against.

She's sort of self-conscious about her lack of book smarts. She can't read very well nor write very well (literally too, given her huge monster arms), so school can be frustrating for her and make her feel inadequate. This just fuels her short-tempered side, and anyone who criticizes her for her lack of book smarts is gonna have a little meeting with her street smarts!! Though, really, she's not that street smart, either. Aesie's very gullible and tends to lack common sense, seldom learning from her mistakes.

Aesie is super protective over her sister, Hiemalis, and wouldn't care that Hiemalis blatantly manipulates her even if she found out. Anyone who upset Hiemalis is gonna find themselves on the wrong end of some monster claws!

"Anyone who makes Hiema cry is gonna die! No exceptions!"

Aesie was born into the Timoris family: a family of powerful and monstrous demons with a large amount of influence over their planet. High expectations were placed on her and her twin sister, Hiemalis, before they were even born. All of these expectations were promptly shattered upon their birth, where it was revealed that they were only sort of monstrous. As it turned out, their mother wasn't the most faithful and happened to have some illicit dealings with some manner of humanoid. It was quite the scandal, but neither Aesie nor her sister were around to witness it. Just as they grew old enough to understand it - and understanding anything was difficult seeing that they were hidden away from public view - they were dropped off far away to fend for themselves.

Despite only being teenagers at the time, Aesie and Hiemalis took their abandonment in stride and proved themselves perfectly capable of surviving in Hell together. Though more human than their family, they were still plenty powerful and had a craving for trouble. They wreaked havoc across the world both for fun and profit, completely losing track of where they were and not caring in the slightest. As long as they had each other, they were unstoppable! That's how Aesie saw it, anyway. Hiemalis was the only one in the world who mattered - everyone else just existed to be exploited and messed with!

The two wound up stumbling into a branch of Hell that was connected the the labyrinth of Hell College. Subsequently the two wound up inside of Hell College proper, causing mischief freely for a while before anyone realized that they weren't even students. Eager to show their family how wrong they were to underestimate them for their "tainted" heritage, Aesie and Hiemalis both signed up as students!

Aesie has next to no magical capabilities and as such needs to rely on brute strength. Fortunately, she has quite a bit of it! Her claim to fame is her huge pair of monster claws, but that's not all she has. People tend not to predict her usage of her horns as a battering ram! Additionally, her tail is covered in spikes. This is useful on its own, but she can also change the size of her tail to use as a brutal mace.