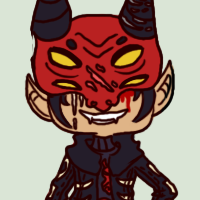 Wet clothes, bruises, when commercials are louder than the show he was watching, mysteries with obvious solutions, making other people cry instead of just pissing them off, breaking his bones, losing his mask, long classes.

An eccentric demon known for his habit of bothering others. He loves to mess with people, teasing them, toying with them, and planting doubts in their minds. All in all he's your typical Hell College stud- what? He's a Heaven College student? Oh, right. Vanadin used to be a Hell College student, but it turns out that he's harboring a nice side and detests the idea of taking a life. He prefers helping people in his own distressing, roundabout ways. Not having the guts to graduate from Hell College, Heaven College took him in as an example of how they're still Totally Open-Minded. They're just using him, of course, but that's none of Vanadin's concern.

just a huge fuckin smarmy asshole who loves messing with people and just being the hugest, most obnoxious dick around. here's some information i copypasted from my wordpad note file about the role in commedia dell'arte he's named after:

[Brighella: Essentially Harlequin's smarter and more vindictive older brother. Adaptable to any circumstance. Rose from poverty and is cruel to those below him. Might even kill. Excellent liar and schemer. Fucko supreme.]

as you can see, he is a fucko supreme however, he's also really bizarre in that he's actually a nice person who just has to be an asshole in everything he does. he likes to help people, but he tends to do so in roundabout ways. he pushes boundaries, but only to help people grow. his personality is irritating, but his heart is shockingly pure.

vanadin used to be a student at hell college, but it quickly became apparent that he wasn't cut out for it. despite all appearances he was actually just too kindhearted and mushy, too influenced by the feelings of others and unwilling to kill. at first glance he seemed like the perfect demon, but within a semester it was clear that he was just too nice to handle hell college's danger and general disregard

after failing his finals he found himself getting booted out into the hellscape, where he lived for a few years before finding a way to reach heaven college. he was - much to the surprise of much of the angelic student body - accepted as a student there, where he's found himself fitting in much better! he's often touted as an example that heaven college isn't as close-minded as hell college insists they are, but hell college officials are pretty sure they're just using him to make themselves look good. after all, his backstory is the perfect lifetime movie for them: demon is just too nice, fails his finals, gets kicked out and abandoned in the hellscape, miraculously makes his way into heaven college, is graced by the angels and taken in as one of their own... hell college just really isn't convinced vanadin was enrolled out of the goodness of heaven college's collective heart

vanadin himself isn't particularly concerned with the opinions of either college, though, and is having a perfectly good time wherever he goes!

he tends to visit hell college a lot, and the faculty there is pretty sure he's here to spy on them and feed information back to heaven college...

aside from his extraordinary scheming abilities, he has enhanced strength, dexterity, speed, and jumping skill compared to humans. he can even float in the air for a while despite his lack of wings, like some kind of fucked up anime character. his tail is prehensile, he's got very pointy teeth, and he can telekinetically cut things. he can also probably control bones or some shit, that'd be metal. and, of course, like most demons he's capable of making contracts with others in exchange for their souls

when his mask is off - which is very rare - he can read the minds of those he comes into eye contact with. he can't control this power, though, so it can become kind of overwhelming to be bombarded with the thoughts of every person he looks at. if he puts his mask on someone else (or if they put it on on their own), he gains control over their body and can access their subconscious.