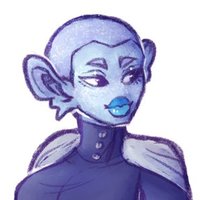 Counselor of Harvesting - everything the occupants of the ship need to do anything, she is ultimately responsible for.

One of the few on board who is actually part of the Goo Alien's military structure - not that that necessitates the buzz cut, but if you're emulating humans' form, might as well emulate their military stylings as well. And the same ears as Grerbe? No, obvously Grerbe copied them from her. Stop asking.

The most emotionally manipulative of the three counselors - though most under her realize after their years of service that most of her "mood swings" are calculated.

Harvesting officially took charge of about half of the lower-grade staff of Navigation when Ji'esala had her breakdown.