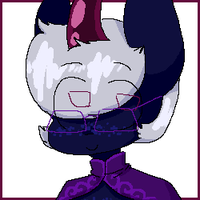 As the integral trapezoid structure, Trapetsiya is the living embodiment of trapezoids and all related imagery, memetics, and concepts. Trapezoids exist because Trapetsiya exists, and he is an overpowered reality warper due to this.

If there is one thing Trapetsiya loves, it is things. An avid collector of literally everything remotely beautiful, Trapet hoards wealth, trinkets, experiences, collections, artwork, clothing, food - anything he can get his hands on. His house is a deathtrap maze of all the shit he's collected, though it's at least sorted and usually on shelves/in display cabinets.

Most of these things, he collects through a network of relationships with mortals - usually with the higher classes: royalty, CEOs, the rich elite. He blends in perfectly into this society, what with his gentle, sweet grace and lovely manners. Laden with dozens of spouses in different Universes and Timelines, Trapet juggles a myriad of dynamics with ease. Falling fast and hard, it's more difficult to keep his heart from gluing onto mortals than it is to steal some of his precious objects.

He, of course, adores his fellow Mags, always happy to share something with them or let them borrow anything he owns. There's a bit of an unspoken expectation that they'll return whatever it was back after they're done, but hey, at least he's offering.

Sweet, gentle. Comes off as highly pacifistic (correct), mellow (correct), and airheaded (incorrect). Doesn't intentionally play up the ditz persona, but unconsciously leans into it. Just doesn't come off as a kinda person to go to for advice, which is fine, because he'd rather not be.

Deeply generous, loves sharing things with others. Materialistic. Confused when others don't express adoration through gifts or presents. Misreads situations and neglects to speak up about it. Too conflict-averse to be good at resolution.

Well-versed in formal manners and politeness. Comes off as posh, but not snooty. Always seems to have a trinket or a pick-me-up for the situation. Renowned socialite and member of fine society. Not intentionally a homewrecker (on either side) but misunderstands monogamy. Expects his partners to be okay with his polyandry, hurt when they aren't.

Knowledgeable about a wide variety of crafts, and is handsy. In a pinch, can make just about anything with any materials, but unlikely to offer to unless prompted. Easy to "trick" into doing things by impling they're generous or wanted.

[This user's Whizpr is locked to followers-only. Send a follow request to view their whizprs.]

Semiugolnik     (close friend!)
Semi and Trapet bump into each other more often than not. As a nod, Semi never infects Trapet's mortals with the Game, and honestly, he's grateful. Besides that, though, Semi always has plenty of energy, stories, and wishes to share that warm Trapet's heart to hear.

Peshchani     (close friend!!)
Pesh and Trapet are often found at each other's parties, partaking in mortal high classes as socialites. They know how to bounce off one another and keep up appearances, though Pesh doesn't quite adhere to romance as Trapet does. Still, it's nice to have someone else who gets it!

Prizma     (close friend!!!)
Prizma enjoys sending Trapet various wealth he's accrued from his pet Timelines, and Trapet is more than grateful for it - most of his private wardrobe is gifts from Prizma. Though neither is home often to catch one another, there's a strong bond and warmth between them despite that.

Dijamant     (friend!)
It's hard not to be friendly with Dij, especially considering how charming and flirtatious he is. And, as a fellow fourie, they have plenty of common ground between their concepts. Though, Siya wouldn't be so forward as to say he's that close to Dij. He knows that position is reserved for few.

Srce     (friend)
Srce is lovely, and very good for casual meetups. She could do with some grace and kindness in her life, too, that Trapet's all too happy to give. They don't know each other super well, but it's also nice to have one or two casual pals amongst the Mags (that isn't Ellipsa or Linija).

Trougao     (so thankful you're home!)
Trou's return to the Mags was a celebratory event, and Siya knows how to celebrate! Showering Trou with gifts and trinkets, especially modern gadgets, has been their way of reconnecting. As Trou's grown into the current world, he's been full of questions about most of Siya's collection.

Rendgen     (welcome back!!)
It's also nice to have Ren back among their ranks, considering the whole Bereave and Jubilee thing. He's a little too crass for Siya's tastes, really, but he's smothered Ren in welcome-home gifts regardless. Who cares if he's crude? He's back, and that's all that matters!

Affine     (how cute!)
As the youngest of their group, Siya has taken a personal shining to Affine. Though he's not home enough to effect Affine on a truly meaningful level, he does enjoy showing Affine how to craft things and how to properly appreciate fine materials. They're friends! At least, in Trapet's eyes.

Kolo     (let's try to be closer?)
Kolo concerns Siya. Not because of his rule against commiserating with mortals - though that does worry him - but Kolo's severe isolation and self-loathing. He resists all attempts to befriend him, though, and Siya isn't versed enough in seducing loners to weasel past his walls.

Shestiugolnik     (well....)
Sessy and Trapet get along! Or so he thought, until Sessy started encroaching on Trapet's Timelines. Mags aren't supposed to prod each other's territory... and the realization that Sessy doesn't quite respect him is unsettling. He isn't sure where to begin repairing their relationship, either.

Power: to have gratitude

Abuses Mag powers to never properly "leave" Timelines. Mags can hop in and out at any timepoint, including previous timepoints they existed in (choosing either to replicate their body to have multiple puppets, or to overtake their previous body and re-do something). It's seamless, and mortals don't perceive them as leaving - because, well, it's as if they never did.

Trapet uses this to essentially exist perpetually in every Timeline he has a stake in at once. Though he does spend time outside of them (and only in one at a time), he pops in and out right after leaving, so it's never obvious that he left.

This rewrites the "time states" where he had left and the mortals were very confused where their lover had just disappeared to. But it's fine - it's not like they remember, and there's no real consequences.

Actually There Are Some Consequences.

Timelines are built to withstand anything that occurs in them, within the confines of their ability. This means? A Timeline remains stable so long as the actors in it are what are in its "memory". If Person A never existed in a certain Timeline, then Person A will not be accounted for in its memory. The Timeline can accommodate any sort of disaster, apocalypse, etc., that its in-TL actors apply to it, aka that its memory is compatible with.

Like DNA, most of these jumbles are so tiny and so inconsequential that the Timeline functions perfectly fine despite it. But the more jumbles that appear - AKA the more the out-of-TL actor starts doing, and the more out-of-TL actors start appearing - the worse the jumbles get. If they're bad enough, the Timeline collapses, and everyone inside of it dies.

Examples of out-of-Timeline actors include Fragments, Timeline hoppers... and Magnitude Fragments, like Trapetsiya. Thankfully for Trapet, his involvements are so minor and simple that he can get away with his mortalfucking no problem. But it is jumbling tiny bits.

He also does have a bonus, though, in that a Mag's current presence in a Timeline is stabilizing by virtue of how radioactive they are. By constantly leaking magic into a Timeline, they preserve it and prevent collapse. They can also reset Timelines and bring them back from the brink of collapse pretty easily, so in reality it's mostly fine.

Gets frustrated very quickly and keeps asking why you have to fight. What's the point? Why can't we use our words? It's much better to solve things democratically, don't you think?

Doesn't really fight back or initiate, but will defend self - shields, bubbles, healing, teleporting whoever's after him away. If partners are around, will defer to them and play the act of a damsel in distress. Tries to avoid using reality warping or magics that make them look suspicious.

House in Magtown is a hoarder's paradise, but it's at least a neat one. Non-euclidian impossible space abounds; luckily the doors always seem to lead exactly where Trapet and his guests need to go. It's unclear how many rooms there are in the house, but Trapet does keep a mental count. Shelves and cabinets are everywhere, filled and sorted neatly with his possessions. He'll tell you about all of them, if you ask. (Don't ask.)

Has various rooms with his mortals, most full of riches and wealth. Picture exotic pets and furs, closets full of expensive silk and dresses, walls of jewelry by the finest craftsmen, the most delicious food waiting for him on platters. Truly luxurious.

Unknown as a Mag to mortals. Considered to be godly of some fashion by mortal spouses - something's just that clearly off - but accepted, nonetheless, as one of them. Adored for grace, beauty, and gentleness.

Relatively known to the COR. Suspected he's some sort of rogue Fragment, showing up in as many Timelines as he has, but unknown Mag status.

Liked among the Mags. Generally nice guy. Hard to find fault with him.

Waffles between "it's okay to enjoy the fine things" and "I don't deserve any of this". Struggles to place a sense of worth in self, fills void with being cared for. Because if other people care about him, then surely he matters, right? Avoids thinking about his imposter syndrome and swallows malcontent. Very good at pretending nothing's wrong until he inevitably hits a breaking point and shatters. Very good at picking himself up and pretending it's okay.