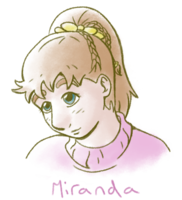 Miranda is positive, kind, eager to learn, musical, lazy and really shy. She has started countless hobbies but eventually abandoned most of them, which has resulted into her knowing something about many topics but not mastering any of them. She is very afraid of talking in front of crowds and has a habit of hiding her face whenever she feels embarrassed. Doesn't really know how to get angry even if she had a good reason to do so.

Miranda is a 161 cm tall young girl. Her face is round and body a bit chubby, mostly thanks to her not liking sports at all. She has long light brown hair, turquoise eyes and often somewhat surprised or startled expression. She favors covering, pastel colored clothes and small, cute accessories.

Miranda was born for two Pokémon trainers, Reliam and Charlotte, together with her twin sister Marilyn. As toddlers the girls were nearly identical, but as soon as their personalities started to really form it became clear the two were very different from each other. While Marilyn was outgoing, sporty and downright rash kid, Miranda was quiet and kind but overwhelmingly shy. They did still spend a lot of time together as well as with other kids from the neighborhood, mainly meaning the kids of Blacquois family. Though while Miranda did hang with the rest of the gang she never formed all that deep bond with any of her childhood friends.

Soon after starting elementary school Miranda caught her first Pokémon. She lured a wild Cottonee to come with her and then caught it with her dad's Premier Ball. The Pokémon the girl then named Veeti sure was a handful: it wasn't intentionally mischievous, but instead it had a tendency to float away whenever it felt like it. Even if Veeti didn't seem all that caring towards its trainer either, it still was a great comfort for its young trainer whenever she was upset and especially when her grandfather died rather suddenly. After a few years Miranda got a Sun Stone as a present from her parents and she evolved Veeti into Whimsicott.

As a teen Miranda started to take some distance from her old friends and even her sister. She didn't really feel like she belonged to their group anymore and instead she started to spend more time sitting in front of computer. Her parents were somewhat worried about it, but it actually turned out to be good for her as she eventually found a new friend from internet, Viika. After talking with each other for months the two youngsters decided to meet for real, which turned into an exciting adventure that Miranda kept as a secret from her parents. Fortunately everything went just fine and the two friends grew rather close over time. Soon Miranda realized she even had a crush for Viika, but she couldn't even dream of ever confessing it to them.

After conpulsory school Miranda started to study to become Pokémon caretaker. She spent many of her training periods in uncle Lucas's farm and got to spend time with her cousins as well as many great Pokémon. She also started to become interested in Pokémon breeding. That in mind she bought herself a Growlithe from a breeder, raised it with care, evolved it into Arcanine and tried out breeding with it. It was actually very uncommon for Miranda to invest so much time into a hobby, and because the field still interested her she soon started to consider Pokémon breeder as an actual career option. Though there was still plenty of time to decide, as she still had a school to finish and teenage life with all of its ups and downs to live.