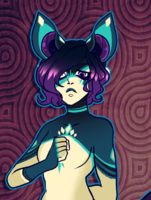 -Any species but shooter prefered-

Iris's mom decided enough was enough, such a beautiful and young woman from her pedigree couldn't just run around  swinging her sword at everyone and not committing to a relationship and settle down, think of family and her future, for that she settle a speed dating day for her daughter.

The young shooter was not happy and you could tell not only by her face but by the fact that she didn’t even bother to change clothes, her assassin ones were enough. Even her foil was right next to her, as if she was in a hurry to do some work. She tapped the table impatiently with her nails, making everybody around her uncomfortable, she highly doubts anybody would pick on her mom’s advertisement so she was just counting the seconds for this to end.

Holding herself high, Asmodi slips into the cafe, wearing a small smile for anyone who might look. Her eyes don't show much of the same 'cheerfulness', occupied as she is scanning the environment, but she wouldn't see herself as less than approachable. It was only a day's outing, something curious to do- it wasn't as if she was trying to make an impression on royalty- assuming the advertisement was less than literal.

She runs her hands over her blouse, subtly checking that the vials tucked beside her hips stayed in place. Pick your poison, love or venom, she would never go a day without being at least prepared. And grateful for that she almost is, as her eyes land on the only person who appears to be waiting for something. She'll reserve her judgement for after the shooter opens her mouth, she supposes.

She rests her palms on the table, opposite to the lady, and leans her weight on it. "Hello, there. You wouldn't happen to be the 'dream' on that little note, would you?" she asks, settling down on the chair as she continues. "I'm Asmodi."

Iris looks at the young sparkly dasher with a completely unfriendly look on her face. Of all the people who could have come it had to be a deer? ugh .
"Whatever you read on that disgusting AD it's stupid, but yeah i guess you can say it's me." She sorta didn't want to be rude to whoever would reply to it mostly because it's not their fault but she was definetly not happy about this, "Sit if you want, or leave. Either way i dont care"

"Hm." She drums her nails over the tabletop and shrugs a bit. "Well, it's not as if I have anything else dying to get in the way." Asmodi's smile had slipped for a moment, but it returns a little hint more mischievous now. "If it hadn't been your idea, then who's responsible for trapping you in such a terrible circumstance?"

There was a moment of silence as Iris figured out that the dasher already got there might as well entertain her with the answer. After all knowing her mother there might be somebody to testify that she actually stood for the agreed period time and talked to possible partners that saw her ad. Iris's shoulders drops as she sighs almost as she accepted defeat in a battle. She could easily murder whoever got in her way but she couldn't go against her mother's will "That would be my mother. If i didn't want to be in this situation i wouldn't put an advertisement like that , would i now?".

"Thank you for clarifying something already clear, dear-" She says, and though her tone shows a hint of sarcasm her expression seems perfectly content. "Ah. Well, at the very least, you still have her- if she's atrocious in every sense I can't say how sorry I am. Regardless, though, would you mind telling me what stands true instead of your mother's words?" She pauses, laughs a tiny bit. "Or put more simply, tell me about yourself."

She squints at the dasher, clearly not amuzed by her sarcastic tone "Don't ask stupid questions if you dont want stupid answers" .

"Hmm.." In all her history this was never something she was asked ever. What there was so say, she never really took a dive to think about herself as an individual, without her sister, without her job. Her silence grew longer as she kept collecting words and thoughts on her mind to make a case but it was hard. "Why dont you tell me about yourself first? considering whatever my mother put there might be truth in some degree, doubt she would lie for the sake of getting more people interested."